By Carlos A. Quiroga 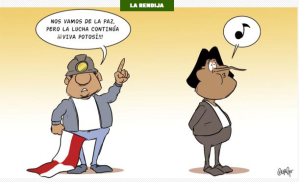 For over four centuries, the city of Potosi has been synonymous with wealth. In Spanish there is a saying, “Vale un Potosí”, or “to be worth a Potosi”, used when speaking of something of great value. [cartoon is from El Deber, July 31, 2015. The potosino miner says: We are living La Paz, but the fight continues, hail Potosi! while current president seems distracted… and not caring at all…]

The splendor of this Andean town located at over 4,000 meters above sea level, the most populated city during the 17th century earning it the name of “Imperial Villa”, lasted from the beginning of the Spanish colony in the Americas until well into the second century of Bolivia’s history, the republic which it helped support.

The famous Cerro Rico, which overlooks Potosi, continues to be exploited by thousands of independent miners and no one really knows how much silver still remains in its adits.

What is clear, however, is that the city has none of the radiance of the past and that its inhabitants cannot be said to be prosperous. On the contrary, they have many reasons to be discontent and blame the government for their poverty, in a country where poverty is the rule.

Under the leadership of civic leader Johnny Llalli, a self-taught miner and taxi driver, the people of Potosi have just reached the 25-day mark on a campaign of strikes and blockades that seem to have done more damage to them than to the government of indigenous president Evo Morales.

Llalli and over a thousand other protesters returned to Potosi on Thursday, after fruitless protests against Morales in La Paz.

They wanted the government to approve 26 development projects that would benefit Potosi, including an international airport which would allow Potosi to grow as a tourist attraction, but they weren’t even able to meet with Morales.

This time, David could not match Goliath.

Is it possible for this southern Bolivian city to fight its way out of poverty without the help of the government?

The answer will tell us whether Potosi is still worth a Potosi.