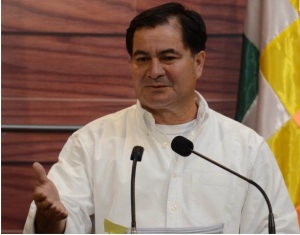 This picture is from http://www.datos-bo.com.

It is hard to acknowledge that in a country under democracy, a Senator seeks political asylum… Marco Chuquimia reports for El Deber:

Senator takes refuge in the Embassy of Brazil

Overwhelmed by more than 20 trials, by the pressures and threats of death which says, were launched against him and his family, the opposition Senator Roger Pinto (PPB-CN) sought refuge on Monday at the Embassy of Brazil in La Paz to request amnesty for those who they considered are persecuted politicians, an unprecedented case in the last 30 years in the country.

Pinto, aged 52 and Pando parliamentary since 1997, made public a letter read by legislators of his party, which says: “Today I am in the difficult and painful circumstances to seek refuge at the Embassy of the Republic of the Brazil, because I have no other alternative due to the harassment and harsh persecution to which I subjected all this time by the Government of Evo Morales”.

From Brasilia, the Brazilian Minister of Foreign Affairs, Antonio Patriota, confirmed that his Office received and ‘analyses’ the request for asylum of Pinto, claiming to be persecuted politician of the Bolivian Government.

The Brazilian Foreign Ministry, Tovar Nunes, spokesman explained that the application of Pinto will be analyzed within the legal framework, which means “gathering evidence to establish whether it should be” the granting of political asylum.

Until last night, representatives of the Bolivian Government had not ruled on the situation of the opposition lawmaker, although the governing movement for Socialism (MAS) deplored the initiative of Pando Senator, the first case of this kind which is produced in the country since it regained democracy in 1982.

MAS congressperson Galo Bonifaz described as “exaggerated those attempted actions to request a political asylum because they are confusing public opinion”, while his ally Fidel Surco said that “there is no reason to argue political persecution”.

However, in his letter, My truth to the people of Bolivia, Pinto denounces the Government initiated proceedings in the judicial districts of Cobija, La Paz, Santa Cruz and Sucre, which is obliged to attend and at the same time to attend the Senate for fulfilling their duties. “By every denunciation of corruption or drug trafficking which I am presenting, the Executive responds by opening a new process one more crazy than the other”, Pinto said in his letter.

Among the most curious processes, according to Pinto, there is one for cutting down two trees that were within his property and for this was ordered not to leave the jurisdiction and must submit guarantors; another trial dates back to 2007 when the new political Constitution of the State was adopted in the defunct Congress and Pinto left the session, this action is now translated into a trial by ‘abandonment of functions’.

The Deputy Adrián Oliva, CN indicated that Pinto sought asylum because he has no other option given the ‘harassment’ and ‘inclement persecution’ suffered by those who accuse Morales. The opposition recalled that since 2006, when Evo came to power, there are political refugees in Argentina, Brazil, Spain, United States and Paraguay.

Majority caucus of the MAS blocked yesterday in the Senate two legislative initiatives put forward by the opposition Róger Pinto, CN, who found refuge in the Embassy of Brazil in La Paz, which sought political asylum.

Opposition caucus requested the dispensation of the procedure for the consideration of a cameral resolution calling for the investigation of political persecution unleashed by the Government and the adoption of a political amnesty law. Majority Caucus decided that the proposal should be handled through the bureaucratic process and sent to the Commission on Plural justice.

The second request was a license for Senator Pinto, so he doesn’t lose his seat, and the letter points out that his absence will last the length of time that lasts its process; again, the ruling party decided that the letter should be considered by the Secretariat.

Vain were the efforts of colleagues from Pinto, who had called for consideration of the investiture of the opposition Senator and that, moreover, is aggravated when he represents the opposition. According to the Government, Pinto must respond to justice and not hide in strategies that only seek to impact media at national and international levels.

For Senator Germán Antelo, Pinto faces seven trials for contempt, while this figure should be abolished from the criminal code.

My truth to the people

Decision. After several years of struggle for the defense of human rights, the rule of the democratic system and respect to think differently, I feel the painful circumstances seeking refuge in the Embassy of Brazil. I have another alternative due to harassment and harsh persecution of the Government of Evo Morales.

Trials. I have more than 20 criminal proceedings, one more crazy than the other. Almost every week I must declare in La Paz, Santa Cruz, Sucre and Cobija.

Rematch. To each accusation I made against acts of corruption or drug trafficking, they open me criminal proceedings for contempt, sedition and defamation. Impunity has become institutionalized.

Case. Recently, from the United States [former police general Sanabria], it became public the complaint for protection to drug trafficking against the former Minister Sacha Llorenti and former viceminister Marco Farfán. Previously asked the President to investigate them, but only received in retaliation new trials and threats.

Rózsa. With other colleagues I presented information that demonstrates the extrajudicial execution, torture and inhuman treatment in the police intervention on April 16, 2009 at the America Hotel. [there is book on the subject by Carlos Valverde]

Position. Pressures against me multiplied and worsened the persecution. A female judge in Cobija did not hesitate to get illegal and false evidence to prosecute me. The authorities of Brazil spoke against the move.

Harassment. No longer is my freedom, but my life and my family. Political hatred wants to charge new victims.