Bolivian police under its most severe crisis of all times…

“Law & Order” in current Bolivia is just a TV show you can watch over cable TV, just that… no Law, no Order… unfortunately.

Criminality rates on the rise, community enforcement bordering lynching and police force spending more time controlling/preventing/attacking street riots, blockades are part of the existing “Order”. The following cartoons show this month’s perception of our police force. Then, an article about General Rene Sanabria, a policeman who is currently in a US jail… for narcotrafficking. 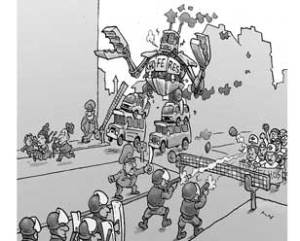 Police force dual reaction with riots and demonstrations. On one side the powerful public transport group (owners and drivers) who show excessive power and are violent: beating their own ‘colleagues’ if they don’t comply with their strike, throwing rocks, destroying tires of vehicles who dare to provide public transport during their strikes, with little if any police control.

On the other hand, police shows more violence when confronting those groups who demonstrate against central government policies. 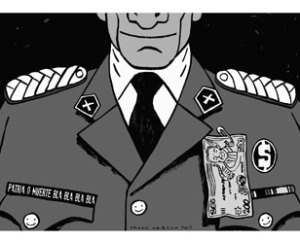 It shows a policeman chest not only with decorations but with money. Recently accusations of bribery payments to allow relatives of current political party in power (MAS) was discovered and has triggered changes at the top of the police force structure.

As it happens in other LAC countries, Bolivian police force has its share of corruption. Common crime and illegal drug consumption, commercialization and production have collapsed law enforcement. 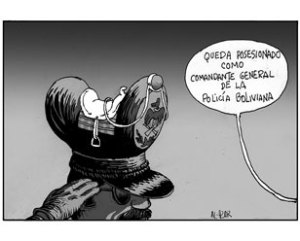 This cartoon shows the new policeman taking office, “you are hereby appointed as General Commander of the Bolivian Police”

The shape of the hat shows a saddle which represents how police force has lost its institutional independence and is subdued to political control. So, police activity and planning of their activities has to enforce first those political priorities over fighting regular crimes. 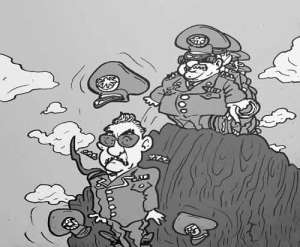 It shows the way police hierarchy is being driven. Sudden changes, replacements are so common that the whole structure is now in peril.

The following news is from El Deber, it reports the whereabouts and actions of Rene Sanabria, former general of the Bolivian police force:

General René Sanabria, who since last year is serving his sentence in United States for conspiracy to enter drugs into that country, stated that there are officials from the current Government involved in drug trafficking and defied a former Minister and a former viceminister to reveal the reports including names and evidence.

Sanabria, in a letter sent to El Deber and the United States Univision Network, through his lawyer, Sabrina Puglisi, argues that “is a duty of the Government ex-Minister Sacha Llorenti to give away the identity of public officials involved in crimes and acts of corruption of drug trafficking, according to indications and evidence gathered by the research of the Cigein”, in allusion to the Center of Intelligence and Information Generation, a unit of intelligence which he led during the current administration of President Evo Morales.

The retired general of the Bolivian police, who during two years led the special force of fight against drug trafficking before current Government put him at the head of the newly created Cigein, also denied that his wife, Lourdes Nava, fugitive, and his son, Victor Hugo Sanabria Nava, prisoner in La Paz and under process for illicit enrichment, are responsible for stealing or burn documents from the offices of the Cegein.

Instead, Sanabria said in the letter that officials of the Cigein, in statements given to prosecutors investigating the case in Bolivia, realized that it was Government former viceminister Marcos Farfán, subordinate to Minister Llorenti, who took  documents, computer backups and registry book of a year of work, from the office of the Center for intelligence

Gerardo Reyes, director of the research unit of the American television network Univision, which received a copy of the letter of Sanabria, said yesterday he dedicated the second segment of the night newscast to the letter which he also received from the Bolivian General. To the text he added lawyer Puglisi’s statements.

“Introducing the note emphasizing that this document represents a change in the performance of Sanabria, since at first said he would not commit to no one else in the case of drug trafficking.” But now it says in the letter that other government officials of the Government of Bolivia are involved. “Also told in the program that this change can be understood by the legal problems that are suffering both his wife and his son by this case”, said.

Reyes, who was in Bolivia last year to record a documentary about the alleged involvement of government officials in the case of drug trafficking that brought down Sanabria, added that it considered the most striking piece of the letter from the general, the complaint that hides a report on an investigation into drug trafficking. El Deber attempted to contact yesterday in La Paz Llorenti and Farfán for their versions, but was impossible to locate them because both are marginalized from public service. The two are under process for repression to the natives of the TIPNIS, on Chaparina, on September 25 last year.

The third hint in the letter of Sanabria is Fernando Rivera, which remains in the position of legal adviser of the Ministry of the Interior. Yesterday, before the consultation made by El Deber, responded: “this issue was not put in knowledge of the authority. The note is perhaps coming via Ministry of Foreign Affairs or the Consulate and at the time they will send it to the public prosecutor’s Office so that we can investigate. That is what corresponds.”

Sanabria was detained in Panama last year, after a DEA covert operation, and admitted in a trial in Miami that he has conspired to enter drugs to the US. He now serves a sentence of 14 years in prison.

– René Sanabria served as director of the special force of fight against drug trafficking during 2007 and 2008 efforts.

– In February 2010 he assumed the direction of the center of intelligence and information generation (Cigein), dependent from the Ministry of the Government [Interior].

– The simulated transaction of 144 kilograms of cocaine, which were sent in a shipment of zinc to United States, was decisive for the capture of Sanabria.

– The agents that were disguised as ‘narcos’ paid us $ 250,000 to Sanabria’s group through bank accounts in Hong Kong. The American Government is mobilized to recover the money, in addition to $ 1 million, supposedly proceeds from trafficking, accumulated in Hong Kong.

– February 24, 2011 Sanabria was detained in the airport of Panama along with his accomplice Juan Foronda Azero.

– September 23, 2011 Sanabria is sentenced by the Florida Federal Court to 14 years in prison and five of probation for the crime of conspiring to import drugs to the US. His accomplice Marcelo Foronda was sentenced to nine years.

– The wife of Sanabria, Milton Sanchez and another of the accused remain fugitives. One of his sons is detained.

Complains that they persecute his family

Sanabria argues that his wife, Lourdes Nava, received an accusation “defamatory, libelous and reckless”, while his son Victor Hugo, adds, “is held victim of obsessive persecution to my family” and says that he is a young man who dedicated himself to the study and to work.

He also refers to “former employees of Cigein detained in jail for more than one year, without evidence, just by simple accusation.” “They have no liability in the case under investigation”.

Sanabria recalls that in the U.S. he was judged for conspiracy to get drugs into and therefore there is no illicit profits, for what his child is been processed in Bolivia.

Rivera, one of the named, said that in the Ministry they have not received officially the letter of Sanabria.

To summarize our sad reality, El Dia reports that a recent Ipsos poll in Santa Cruz, Cochabamba, La Paz and El Alto, the main cities in Bolivia, have shown that 82% of the population regard the police as little or nothing reliable. For the full Spanish article, please use this link.