Bolivian nurse beaten by the police continues her ordeal

News reported in El Deber and some cartoons that show what happened under democracy:

“We have already submitted the constitutional action of freedom, and subtraction established audience and time to achieve freedom of Mrs. Boyan,” said the lawyer.

Nurse Boyan remains in intensive care in the Hospital of the Thorax, and is denounced by acts of physical aggression to the Deputy Minister of Interior system and police, Jorge Pérez, who was with a wound in the head last Thursday during a protest of the health workers and students of the UMSA and UPEA.

Lawyer Revollo explained Boyan nurse was admitted to the Hospital of the Thorax, as a detained person, which triggered the legal resource to submit a constitutional action of freedom.

Also it was revealed that Deputy Minister Pérez visited on Saturday around 01: 30 hours with a Prosecutor and a coroner to obtain the judicial declaration of the nurse about her participation in the protest on Thursday in the student Plaza, where the Ministry of Health and Sports is located.

The Prime Minister, Carlos Romero, described as “theatrical performance media” the placement of the nurse in the Hospital of the Thorax of La Paz. [the injures as diagnosed by the first medic center where Boyan was sent and later at the Thorax, are far from theatrical; maybe Romero’s statement qualifies better under that category]

However, doctors who take care of her, indicate that her kidney was compromised by the blows that would have suffered in police cells. They also assert that she is pregnant. 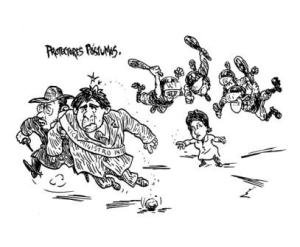 One of the aids of viceminister is “rescuing” him while a group of policemen are jumping over the nurse… with evident signs of a violent attack.

The sign refers to after-the-fact protectors, playing with the ‘posthumous’ word and current political party in power acronym. 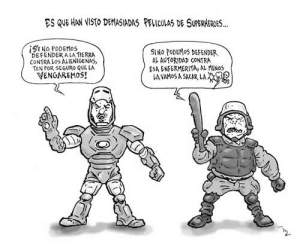 Sign reads: “it’s because they have seen too many superhero movies…”

hero: “if we cannot defend the earth against aliens, be assured that we well avenge it!”

policeman: “if we cannot defend the authority against that little nurse, at least we will take the $%(#^ out of her” 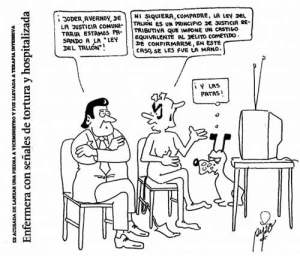 The vertical sign “nurse with traces of torture and hospitalized”

man: “damn it avernoy, from community justice we are passing to the “law of retaliation!” [the Code of Hammurabi]

avernoy: “not even that, mate! the retaliation law is a justice that re-attributes, imposing a punishment equivalent to the offense committed, if confirmed. In this case, they went too far.” [the hand went too far]

dog: [not only the hands but the legs] “but the paws as well”