After the 66 days of struggle and the end of year approaching very fast, the indigenous people and stakeholders of the TIPNIS right to remain as is, are still struggling with two important issues:

This cartoon is from El Diario, November 29, 2011. The brutal police aggression to the TIPNIS marchers goes still unpunished. Human Rights keeps questioning who did the order for such terrible beating; the government finger points everywhere and there are still no clear signs of finding the guilty parties. Human Rights issued a report, absolving/not mentioning current president’s role in this unfortunate incident; and former and existing government officials, including advisors (upper right window) do not provide, nor do they accept their responsibilities. The more this issue remains unpunished, the worse for current government. Bolivian society and worldwide stakeholders are expecting for the truth to appear. 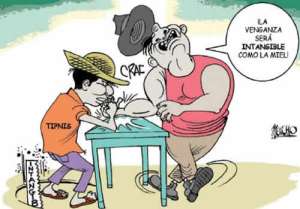 This cartoon is from La Prensa, November 29 2011. It portrays a skinny TIPNIS person defeating a strong, big coca-grower / multi-cultural person, who is saying: “revenge will be as intangible as honey.” The term intangibility that skilfully the government managed to include in the short law, has already began to cause damage. Eco-tourism and some controlled logging inside the TIPNIS, with environmental permits, have been voided, as the government decided to interpret intangibility as doing nothing. When, the indigenous people and the national park were only trying to protect the TIPNIS from a road that intended to cut it by half.

It is nor clear how this will come to an end, despite the law and agreed regulation, the government continues to use this high visible issue as a curtain, to prevent Bolivian society to look at other pressing issues that also need decision (like allowing the export of agricultural produce, increasing the natural gas capacity for consumption, generating employment, combating narcotraffick and crime rates countrywide.

2 thoughts on “Pending issues related to the TIPNIS struggle, as of Dec 1, 2011”