For Bolivian entrepreneurs, the ITF payment limits the relationship with foreign investment

Bolivian Thoughts opinion: The ITF is nothing but a cheap way to secure funds by the incompetent government we have! After the waste of over $160 billion dollars, this lousy ochlocracy needs to continue to misled the population who receive those unsustainable bonuses, just to secure another term and of course to avoid trial for corruption and malfeasance.

For entrepreneurs, the ITF payment limits the relationship with foreign investment

This tax would be valid during this year. The tax was extended three times, since 2006. Analist points out that the measure discourages banking access. 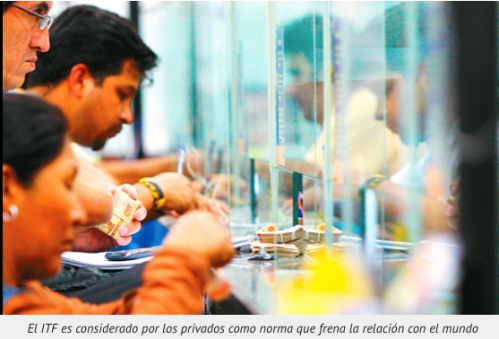 Entrepreneurs do not hide their concern about the validity of the Tax on Financial Transactions (ITF), which is taxed on transactions made in foreign currency and domestic currency with maintenance of value with respect to any foreign currency in financial institutions. They consider that their application reduces opportunities for foreign investment and they ask for their definitive cease.

“This tax that is increasing every year is worrying because they are higher rates to the business sector. We understand that the Government wants to cover the fiscal deficit, but it does not have to be via entrepreneurs. Let’s limit the foreign exchange. When a foreign investor comes, what they want is to return their currency in dollars, not Bolivians. We emphasize our openness to the world because the world uses dollars,” said the president of the National Chamber of Commerce (CNC), Marco Antonio Salinas.

Salinas said that, since 2006, each year it was assured that the tax was going to be charged for 36 months, “but every time they expand it and that does not benefit the business community”.

“It is a measure against business people especially and against people in general who have international activities. The dollar is a unit to relate to the world,” he said.

The president of the National Chamber of Industries (CNI), Horacio Villegas, recalled that the increase in the rate of 0.25% to 0.30% of the ITF for foreign currency, was always “part of the policy of bolivianization to discourage the use of dollars.”

The application of the tax charged in the transactions of the financial entities is intended to sustain the generation of resources for the State, strengthen the policy of redistribution of income and generate a mechanism of disincentive to the use of foreign currency to bolivianize the economy .

It is not the best way

The economic analyst Alberto Bonadona said for his part that the ITF was not the best way to seek banking access or deepen inter-bank transactions in the country, but it seemed a detriment to the development of banking.

“The Government has considered applying it, more for a collection effort than for a reason that deepens the banking activity. In other countries, the activity of money transfers is done by mobile phone abundantly. This type of transaction should be absolved, if you want to expand financial activity,” he said.

Issues of the subject

568 Millions of Bolivians
It is the sum that the national government expected to collect in year 2017 with the tax.

801 Millions of Bolivians
It is the amount that is intended to be collected at the end of this 2018 administration, according to the state forecasts.

Collection
According to the Government, income from the ITF represents only 0.06% of total collections.

No report yet
The National Tax Service (SIN) has not yet published the data on collections for the application of this tax, for year 2017.