TODAY 01/26/2018 – Caravan of protest and march of torches in Santa Cruz, our patience was exhausted!!

In defense of the referendum on February 21

• The mobilizations will start tomorrow from 4:00 pm and will gather by the Christ the Redeemer 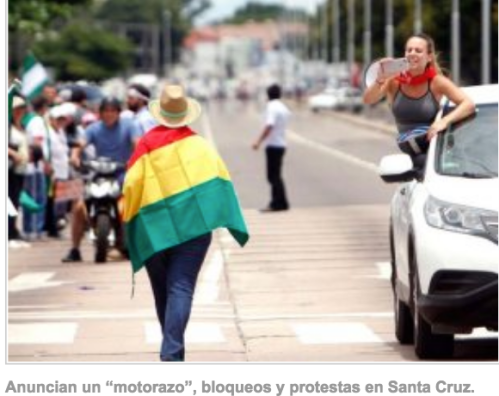 The spokesman of the Coordination for Democracy of Santa Cruz, Víctor Hugo Valda, announced that for this Friday a motorcade of motorcycles and vehicles called “motorazo” and march of torches, in addition to protests in the precarnavaleras of Saturday in defense of the results of February 21 and the Political Constitution of the State.

Valda explained that the caravan will participate more than 60 clubs of motorcycles, quads, tris and 4×4 vehicles that will leave at 16.00 hours from the Eighth Ring of the city of Santa Cruz and will concentrate on Christ the Redeemer, where they will make a rally to demand respect to 21F.

He specified that the blockades and march of torches will be made in the Second Ring from 6:30 p.m. until 8:10 p.m. The mobilization was called “night of light”.

For her part, Tatiana Pérez, from the Alianza de Mujeres por Bolivia platform, confirmed the participation of her movement in the motorazo and explained that after the abrogation of the Criminal System Code, the next step of struggle is to demand that the Government respect the citizen vote of the February 21 referendum that said No to indefinite re-election.

“The struggle does not end with the abrogation of the Penal Code and we invite the people to join this fight and demand respect for our vote. On Friday we started with the motorazo where more than 60 clubs will participate,” she said.

For his part, Rómulo Calvo, of the Medical College of Santa Cruz, supported the measures and assured that the doctors will join the demonstrations in defense of the results of 21F.

“We, the health sector never lowered our arms in this fight. We believe that we are ending an important battle with the repeal of the Criminal Code, but we still need to ask that our vote be respected. We doctors have never let down our guard and we continue to mobilize to demand respect for this country that we love so much,” he said. (ANF)

Bolivian Thoughts opinion: evo’s government has lost ALL credibility, the Bolivian population in its majority decided: we had enough of his delusional pretensions to remain in power! He must accept we said NO to his re re re renomination, enough!