Sexual Exploitation of Girls on the Rise in Bolivia, Activists Warn 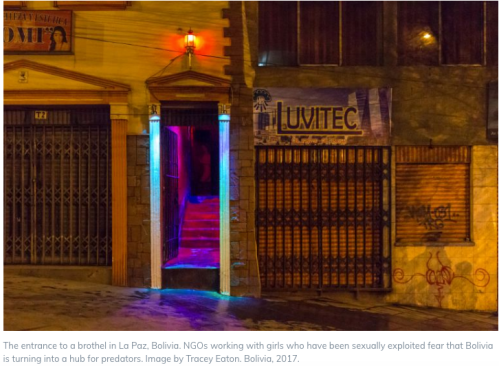 EL ALTO, BOLIVIA – Elizabeth Soliz walks out into the crisp night air and heads toward a bustling outdoor market, looking for teenagers selling sex for as little as $3.

Suddenly, a girl in blue jeans shouts out, “Mrs. Eli!” and runs over to hug Soliz.

“These girls suffer from a lack of love,” says Soliz, who helps rehabilitate teenagers who have been forced into the sex trade by traffickers or extreme poverty. “The fact that you ask them, ‘How have been today?’ is very important because nobody during the day has asked them how they have been.”

For the past eight years, Soliz has been working with the Munasim Kullakita Foundation, a nonprofit Catholic group that supports victims of sexual violence and human trafficking. She tries to help girls get out of sex work, steering them back to school if they’ve dropped out and helping them find jobs. The foundation also offers medical and psychological counseling, along with housing for several dozen girls at a shelter for survivors of sexual violence and trafficking.

In her time with the Munasim Kullakita Foundation – whose name means “Love Yourself, Little Sister” in Aymara, an indigenous Bolivian language – Soliz says she has seen a sharp rise in sexual exploitation of girls in El Alto, Bolivia’s second-largest city.

The group’s director, Ricardo Giavarini, agrees, estimating that at least 250 girls aged between 11 and 17 are subjected to commercial sexual exploitation in the city of nearly 1 million people. And that figure doesn’t include the even younger girls who have been trafficked. “The sexual exploitation of girls and teenagers in Bolivia has increased at an alarming rate.”

Precise numbers are hard to find. Sex work is legal in Bolivia for women 18 and older, and at last count, in 2012, there were more than 45,000 registered sex workers in the country. However, the government doesn’t collect statistics on underage girls in the industry. “It’s an underground world that’s sometimes difficult to understand,” Giavarini says.

But the workers at the Munasim Kullakita Foundation say they see a growing number of young women and girls subjected to commercial sexual exploitation. Bolivia is turning into a hub for sexual predators, they say, and the worry is that the country will soon join Colombia, Peru and Brazil as one of Latin America’s leading destinations for sex tourism.

Every Thursday night, Giavarini and other foundation workers go into the streets looking to help exploited girls, including those forced into the sex trade.

“El Alto is a source, transit point and destination for the girls we follow,” says Giavarini, an Italian who settled in Bolivia four decades ago. “There are routes that go to neighboring countries, specifically Brazil, Argentina, Chile, Peru, Paraguay, where evidence and presence of minors [in sex work] have been found.”

The Munasim Kullakita Foundation’s office is in La Ceja, just east of El Alto’s international airport. It’s a town where clandestine bars and rent-by-the-hour hotels operate alongside a chaotic jumble of restaurants, vegetable stands, Internet cafes and shops. The neon lights of the brothels in La Ceja’s 12 de Octubre (October 12) neighborhood begin to shine a few hours after sundown.

Vendors sell alcohol and maca root powder, touted as a “natural Viagra,” while pimps standing on the sidewalk pass out slips of paper giving the addresses of clandestine clubs. They describe the youngest girls as “the new ones” or the “healthy ones.”

“Sometimes they call them virgins and, obviously, these brothels charge much more for them,” says foundation worker Reina Victoria Calles. “They are between 15 and 17 years old.”

When a new teenage girl arrives, word spreads quickly, says the foundation’s assistant director Ariel Ramirez. “The men line up, 10 men, to have sexual intercourse with her,” he says. “These brothels force girls to have sex up to 30 times in a single night.”

Ramirez says many of the girls come from Santa Cruz, Beni and other provinces. Middlemen promise teenage girls jobs and other opportunities to convince them to visit El Alto. Once in the city, criminal groups take over, forcing the girls into the sex trade. Some stay in El Alto; others are trafficked to other cities in Bolivia and beyond.

Activists say the government doesn’t see the sexual exploitation of children as a priority. Weak law enforcement along with a growing social acceptance of legal sex work make it difficult to tackle the issue.

Also making it harder is the fact that so few children in the industry seek help from the police. Some girls who have been sexually exploited don’t feel safe reporting the crime because they have heard of or experienced officers extorting money from victims, or raping them.

Some girls come from such dysfunctional and violent homes that even sex work is an improvement. “They don’t feel victimized,” Ramirez says.

Back in La Ceja, the girls blend in easily with the nighttime crowd. Some girls walk through the market looking for clients. Others hang out at bars and cafes. Or they wait for clients outside rent-by-the-hour hotels.

The girls won’t talk to journalists. Gaining their trust is difficult and time-consuming, Elizabeth Soliz says. And there is always the chance of heartbreaking loss. Girls she knows have died of drug overdoses, AIDS or alcoholism.

But there are success stories, too. Six in 10 girls that the foundation takes off the streets do not return, foundation workers say. That gives Soliz reason for hope.

“I like what I do,” she says. “I do it with a lot of love. It is better to give than to receive. That is something that I have learned.”

My sincere respect and admiration to people like Elizabeth Soliz who do help these girls!!