It didn’t matter how late the results came exposed, took longer than before, when we didn’t have the technology we have nowadays. Back in January 2013, current president gave preliminary figures and on July 31, 2013, results showed over 350K people missing???!!! How could this be possible?

The same census with two results:

A number of “theories” can be drawn:

1. INE is inept and should be disbanded, after $11 million dollars to display such results…. Thus, current president shows an inefficient and wrong need to speak constantly … had he waited or confirmed the results, he wouldn’t be exposed like this… although we have to say that he also likes to say one thing, get “re-interpreted” by some of his acolytes or simply says he “is learning”… in any case it is an open and very visible mishap of this government’s continuous wrongdoings… they don’t deserve to govern Bolivia!

2. Data was “cooked” over this time, to “erase” citizens from the places where, curiously enough, the MAS lost in earlier elections. While numbers consolidate or are enlarged in those places where supposedly the MAS has more electoral votes… so goes on the illegitimate re-re-election…. and this was the perfect way to clean up their mess, due to loss of faith for many of the Bolivians, given the poor management, corruption, extortion of current government. In any case, it doesn’t matter if current census’ results are validated/accepted or rejected in full, the government will win in either case: if accepted will have more votes where are badly needed to configure the Congress composition. If results are rejected, they still win as they would keep the “old” composition, thus the chances for MAS to perpetuate in power.

3. Maybe the president is truly a poor Spanish reader and confused the numbers, back in January… maybe his ego and arrogance prevented from showing he made a human mistake…

4. With these results, there is also the uncertainty that some findings could have been “altered” like the fact that over 52% of the people in the census stablished that they do not belong to any of the indigenous groups… like me, the mestizo population is by far the largest portion of the Bolivian population, something that current government stubbornly rejects. So, who says the people missing didn’t in fact add to the mestizo category?

5. Another result of the census showed around 20% of the houses being “visited” were empty… why is such a large possible? Did INE really visit all of them? Government officials argue that some municipal leaders and even some governors like the one from La Paz, urged the people to return to their hometowns in order not to lose resources… ??? in addition, question arose about those empty “homes” as if they were in fact houses, or empty lots, and finally how did sewage and potable water services were accounted for in this case? And the list goes on… too many holes and doubts about this census being properly handled.

If you want to look at INE’s data, use this link

Manfredo Kempff, before the final results were known, wrote this wonderful analysis in El Deber: http://www.eldeber.com.bo/vernotacolumnistas.php?id=130726233857

And last but not least, two reactions displayed on Facebook: 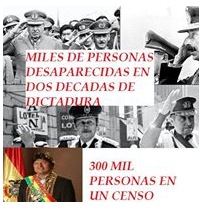 Thousand of people missing in two decades of dictatorship.

300 thousand in one census.

In Bolivia, the INE has eliminated more Bolivians than the bomb in Hiroshima”