WAS LAUNCHED AT THE NATIONAL LEVEL

The orchestras will show their progress with a contest 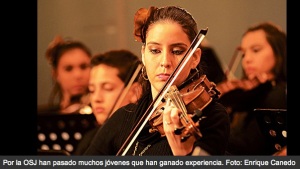 An ideal opportunity to show the progress made in the musical field in Bolivia and to sensitize various sectors of society about the potential of our artists was released yesterday. It is the first national competition of choirs and orchestras, an initiative of CAF (Latin American Development Bank), supported by the Federation of private businessmen in Santa Cruz, the World Bank, the Ministry of Culture, the Governors Office and the Santa Cruz municipality.

Although the competition is nationwide, it was presented in Santa Cruz (in the Federation of Private Entrepreneurs) with the presence of representatives of the main local institutions. This is not a minor detail if one takes into account that in the region, there has been developing a work held in the orchestral theme with the creation of public and private orchestras over the years and with a growing level of musical training.

Hombres Nuevos [New Men], the Municipal Orchestra and the Youth Symphony Orchestra represent a generation of musicians with the merit of having consolidated a work in the genre.

In addition to this academic initiatives, such as the Orchestra of the UAGRM, where it was announced the creation of the career of music to reinforce the area.

All contestants will be received from September, 1 to 15. Orchestras’ recorded videos will be evaluated and 10 semifinalists will be selected.

The form can be sent to agallardo@caf.com