The group in favor to cut the TIPNIS in half with a road has finally arrived La Paz, El Deber reports about the irresponsible behavior of current Bolivian president; his actions can only stir anarchy and violence. A government who sanctioned a Law is saying it is up to the alleged players and the living indigenous TIPNIS community to “talk”? and come to a solution?? 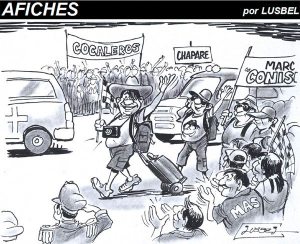 The El Diario cartoon, January 30, 2012 shows how such marchers arrived to La Paz; cheered by the government, party affiliates, the coca growers of Chapare…

After listening for two continuous hours to the marchers of the Conisur, to cancel the short Law (of the Tipnis protection), President Evo Morales chose last night to wash his hands and leave the problem of the TIPNIS road in the hands of the indigenous people themselves, calling for a dialogue between the leadership of those who opposed to the road and those who call for its construction.

“Call on their leaders.” Send them to explain why they imposed the short law. If they don’t come, that means they must be leaders of non-governmental organizations or the Embassy of the United States. “I call leaders Pedro Nuni, Adolfo Chávez and partner (Fernando) Vargas”, said the President.

The leader of the marchers, Gumercindo Pradel, stated that the column [marchers’ group] has its answer and that the leaders of the Tipnis must come to La Paz “immediately to explain this short Law. “Otherwise, if they do not come, then we are going to impose a new law”, Pradel said after the meeting.

What was perceive clearly, was citizen indifference, there was no reception like that occurred in October of last year and although the leadership of the column insisted on saying that they were 4,000 marchers, walkers themselves debunked it, because they said they were 800 people.

National School of nursing students claimed that there was an instruction the evening before and the morning shift should be presented to accompany the March.

The Ombudsman, Rolando Villena, announced that the leadership of the TIPNIS agreed to dialogue with the representatives of the Conisur, but at the end of 20 days, because now it’s been carried out the task of socialization of the law 180 among indigenous communities in the area.

From Trinidad, the President of the CIDOB Foundation, Adolfo Chávez, responded that, as national indigenous leadership, “does not enter the game of confrontation with his brothers”, which, in his opinion, were “carried with deception (to La Paz) by the Government”.

Chavez stressed that the construction of the road will only benefit coca growers seeking to extend their crops in the grounds of the Park.

A journalist and two photographers were injured during the violent entry to the plaza Murillo were indigenous people yesterday, 17: 00 approximately, since the Government, through the Deputy Minister for coordination with social movements, César Navarro, communicate them they would just enter today to the Centre of the political power in the country.

Helga Velasco, Gigavisión journalist, was injured in the right upper lip; Carlos Saavedra, Bolivisión network cameraman, suffered a cut in the nasal septum, and Alexander Estívariz, also a cameraman of the Fides Tv network, suffered a cut on the right cheek.

The injuries occurred when indigenous people demanded to enter plaza Murillo and threw chunks of cement with sand against a weak police barrier that was composed of a hundred policemen, approximately.

There was no support from the riot trucks that were parked in the plaza when the marchers arrived of the Tipnis, the policemen did not carry tear gases nor any type of weapon to clear the disturbance.

For the full Spanish article, please use this link:

It is a total shame how current government avoids its duty: to enforce a Law they approved… it is easier to wash the hands and let violence escalate. Remember that this irresponsibility has already caused 16 dead in Huanuni and 3 in Yapacani.

In addition, this government’ actions continue to avoid to enforce laws and takes passive actions like what they are doing with the Margarita oil find and the struggle between Chuquisaca and Tarija.