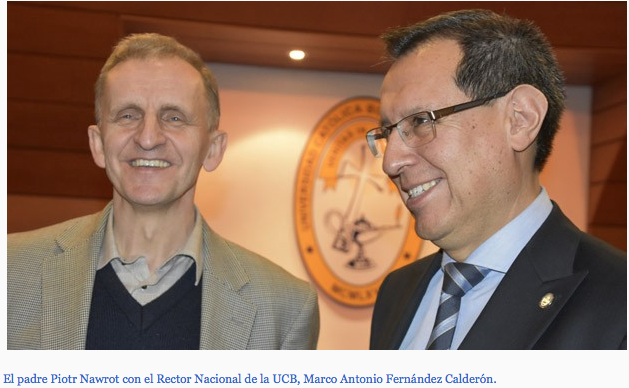 “In Bolivia we have so rich musical documentation that we can teach the whole history of Western music without having to go to Europe,” said Father Piotr Nawrot, musicologist and director of the Chiquitos Festival in Santa Cruz, at a conference at the Regional Academic Unit La Paz, of the Bolivian Catholic University “San Pablo” [UCB].

The UCB National Chancellor, Marco Antonio Fernández Calderón, who welcomed the priest of the Divine Word and of Polish origin, affirmed that Father Piotr’s presentation “is only the tip of the iceberg” of the “immense cultural wealth of Bolivia that has to do with Catholic identity. ” And, for that reason, he suggested to know the missionary baroque music existing in the country.

The conference, called “Missionary Music Documentation: Indian Musicians and their Influence on Missionary Music”, was attended by Bishop Fernando Bascopé Müller of Bolivia, as well as musicologists and the university community.

Father Piotr, who holds a doctorate in musical arts, affirmed that “no one has musical documentation like Bolivia,” as proof of this he showed slides of handwritten staves of the seventeenth and eighteenth centuries. He affirmed that Chiquitos has 5,500 pages of music, Moxos 7,200, the Cathedral of Sucre 43 books of Gregorian chant. “From what has been saved in Bolivia, we have to rewrite the history of Western music, because we have not included it; so important music is of such quality,” he said.

He recalled that Bolivia is not only rich in volume but also in themes: music brought by conquerors, missionaries and musicians, also music composed by criollos, and by indigenous people who were musicians and composers. He affirmed that the natives did not become musicians and composers for evangelization and colonization but “because here (in Bolivia) music was composed before the arrival of the conquest and before the evangelization; the Indians had a musical culture so advanced that some examples of European music have been a simplification for the musician’s ear of this geography.”

Due to the enormous musical wealth in the country, he even encouraged to point out that with the colonization and evangelization the sword and the cross were not ahead, but the violin and the cross, although he admitted that there were abuses of the Spaniards to the natives.

The priest also said that he found convent music in the Convent of Santa Clara in Cochabamba, but in Potosí everything was lost, as well as autochthonous and Afro-American manuscripts to be included in the missionary music repertoire.

Father Piotr believes that Bolivians should be “ashamed” for not having a faculty of musicology because of having “we could boast” of the past, because of the immense amount of musical documentation that exists, because in addition, scholars from neighboring countries could focus their research on the country. “I got my doctorate in Europe and USA; in Europe I have never been taught baroque music, with texts in the languages of the Indians,” he added. (UCB)

Bolivian Thoughts opinion: There is nothing more overwhelming than to attend a Baroque music concert in one of the churches in the Chiquitania! Yo have to come next 2018, as the Festival of Renaissance and Baroque Music will be held. International performers come and it is sensational!