Bolivian Heritage 101: They find 2 corners of a new temple in Tiwanaku

They find 2 corners of a new temple in Tiwanaku

According to the maximum authority of the site, Julio Condori, this discovery will change the integral vision of the archaeological center. 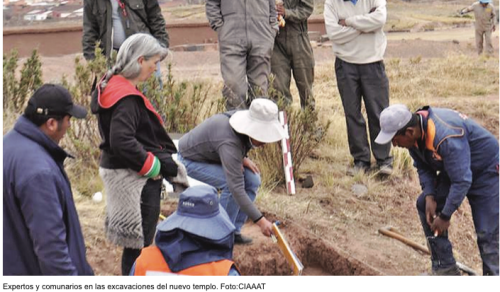 After a series of excavations, a team of international and national experts found the two corners of a new temple or palace in Tiwanaku. According to the maximum authority of the site, Julio Condori, this discovery will change the integral vision of the archaeological center.

“It has been confirmed a new pre-Hispanic structure that complements the other public spaces that are now preserved in this site. Structures very similar to the typical constructions have been found in the Tiwanaku period,” said Julio Condori, Executive Director of the Center for Archaeological Research , Anthropological and Administration of Tiwanaku (CIAAAT).

According to Condori, the experts found a “double wall and filled with double mass that has a kind of compact clay embankment. On the other side has two other rows of stone,” he said. “It’s a square architecture and very similar to Putuni’s temple,” he added.

The expert said that two excavation units were made. “All of this will allow us to plan and address time and costs, and the use of new technology,” he said, adding that further work on the use and characteristics of the temple will be determined in future work.

In May of this year, the United Nations Educational, Scientific and Cultural Organization (Unesco) reported the discovery through a satellite sampling of the new temple and other archaeological structures in Tiwanaku. This work was carried out within the framework of the first results of the project Preservation and Conservation of the Pyramid of Akapana.

According to Unesco, it was detected that Puma Punku has two more platforms that are buried, which surround the whole temple. That is, Puma Punku is higher than what is known today and almost doubles its size.

According to experts, several structures of considerable size (30 meters) were detected in various sectors of Tiwanaku. In addition, several graves, canals and roads were found.

Unesco consultant and archaeologist José Ignacio Gallegos, who developed this work in cooperation with the Universidad Complutense de Madrid, Spain, also mentioned that several structures of considerable size were detected in various sectors of Tiwanaku and more than a hundred small structures circular and rectangular (possibly domestic), several pits, canals and roads.

Unesco also stated that excavation areas have been identified for the next decades. “In the topographic study we have used an advanced remote sensing system using a dron and satellite system (ie multiplying the study levels by work area by three). We have covered more than 411 hectares, obtaining fixed study points,” said Gallegos.

Bolivian Thoughts opinion: I just hope this effort will continue and our heritage gets proper care.

Tiwanaku is of great importance to this hemisphere, it was because of this civilization that the Inca’s prospered, the latter inherited the engineering techniques to build their cities.

This picture shows the Door of the Sun as it was “found,” long before it received proper care. 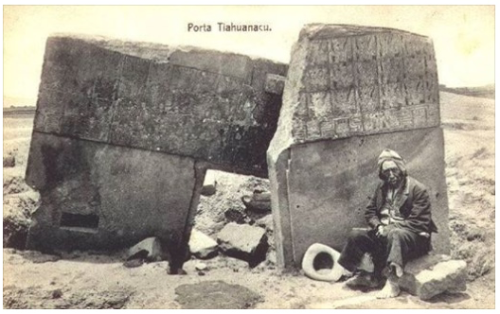 So, I congratulate this new effort and hope we can soon show the world how great this civilization was!