Carolina de Assis reports for the Night Center of Journalism in the Americas:

Bolivian journalist Yadira Peláez took matters into her own hands after she apparently felt an investigation into her complaint of sexual harassment was going nowhere.

On Sept. 12, during a public ceremony in Sacaba, in the department of Cochabamba, Peláez gave President Evo Morales an envelope containing details of her sexual harassment complaint against Carlos Flores, former manager of Bolivia TV.

The envelope contained “the forensic analysis of the ISIF (Institute of Forensic Investigations, for its acronym in Spanish) and the IITCUP (Institute of Scientific and Technical Investigations of the Police, a contact disc with all calls in which I received threats to drop the case, and a letter in which I relate the whole process,” she told ANF. 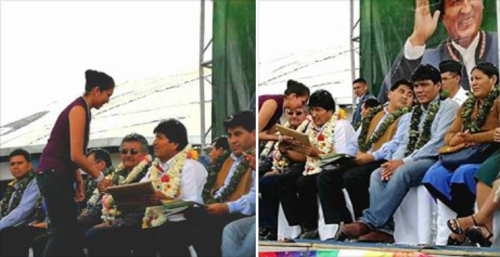 She also said that she has been unemployed and “economically asphyxiated” since her dismissal from BTV in late January and that she hopes the president will be able to intervene in her case.

According to the journalist, when Flores met her, he “began to show interest” for her. “I’ve always tried to keep a distance, to maintain the working relationship,” Peláez told NTN24 in March of this year.

She also told NTN24 that she reported what happened to the then-general manager of BTV, Gísela López, now Minister of Communication of Bolivia. López allegedly told the journalist she would take care of the matter and talk to Flores personally.

However, the harassment continued, and Peláez was dismissed days before López took office as minister and named Flores as general manager of Bolivia TV, on Jan. 25 of this year, ANF reported. Faced with this, the journalist presented the complaint to the Prosecutor’s Office of La Paz, the country’s capital.

In addition to Peláez, another journalist, Claudia P., has also filed a complaint against Flores for sexual, workplace and verbal harassment, according to the ANF. She worked with him in Santa Cruz and said that she brought the complaint to several entities of the State, including the police, the Ministry of Communication and the now-defunct Ministry of Transparency.

The two accusations came out in February, and on March 8, activists from the feminist collective Mujeres Creando invaded the BTV studios to demand justice for the journalists and in the case of Flores’ dismissal.

Due to the repercussions from the case, Minister López suspended Flores from the position of general manager of the state broadcaster “so that he has freedom and time to defend himself against the denunciations,” she said at the time, according to La Razón.

However, the minister also said that the denunciations are intended to undermine her. “It’s clear to me that I am the end. I am the the final objective,” she said, according to La Razón. She accused journalists of trying to “smear [her] name with a purely political end.”

In April, Flores sued Peláez for calumnia and defamation. “What [Flores] is doing is distracting from the sexual harassment case,” the journalist told ANF.

The former BTV manager was hired by the State Attorney General’s Office (PGE) on April 20, as ANF reported at the time, as legal adviser to the agency. Four days later, the PGE reported that he had been dismissed“once the accusations against him were known,” La Razón reported.

Bolivian Thoughts opinion: It infuriates me that under the “leadership” the coca grower caudillo, sexual harassment have increased!

However, it is also understood that it is escalating, beginning from the time this petty leader has said publicly many times misogyny remarks, an example suffices: he said that youngsters who get pregnant their girlfriends could may well enroll into the military service to avoid responsibility …

So, the fact that Peláez had to approach this caudillo in person reflects how Bolivia is ruled … in a very dictatorial way, a vertical iron-claw that this evo forces onto ALL State powers to do as he pleases …. This journalists had to do that, knowing that this petty excuse of a dictator would do something about this harassment. This feels like asking for human rights justice to Joseph Goebbels or Genghis Khan…

The world needs to know these facts to understand our peril!