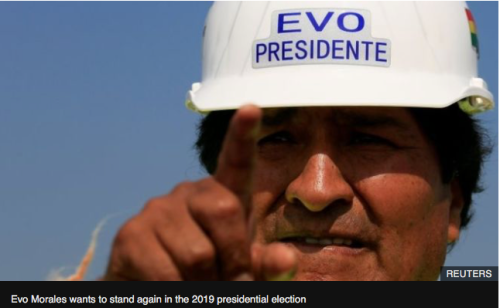 Lawmakers from Bolivia’s governing Movement Towards Socialism party (MAS) have asked the Constitutional Court to allow President Evo Morales to run for a fourth term, despite the constitution preventing him from doing so.

The move comes a year and a half after Bolivians voted against changing the constitution to remove term limits.

At the time, Mr Morales said he would respect the referendum results.

Mr Morales has been in power since January 2006.

April 2013: Constitutional court rules Mr Morales can stand in the 2014 election despite the 2009 constitution limiting presidents to two consecutive terms. The court argues that his first term should not count because it took place before the constitution came into force

Lawmakers from the governing party and two from the Democratic Unity party backed the request to declare the articles on term limits in the constitution “inapplicable”.

They argued that imposing term limits conflicted with the constitutional right of every Bolivian to “participate freely in the formation, exercise and control of political power”. 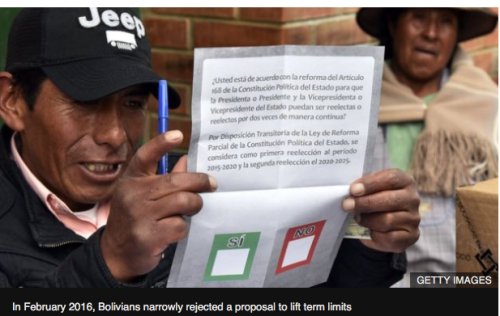 They also want term limits for other political posts such as governors, mayors and lawmakers to be scrapped.

The constitutional court has 15 days to accept or reject the request, and another 45 to come to a decision.

Many Bolivians who voted “no” in the 2016 referendum on term limits said they did not want to see Mr Morales in power for 19 years.

While Mr Morales said at the time that he would respect the outcome of the referendum, he has since stated that he believes the result was down to a “dirty war” launched against him.

Allegations surfaced shortly before the referendum accusing Mr Morales of using his influence to favour a Chinese construction firm in Bolivia, which he denied.

Bolivian Thoughts opinion: This delusional egocentric individual has done everything to seize ALL State powers; he managed to waste over $160 billion dollars; succeeded in having over 700 Bolivians fled the country due to political persecution.

His major accomplishments were: blooming corruption at public offices; State-owned enterprises that went or are about to be bankrupt; deforestation reached its highest levels during this last eleven years; more road blockades than ever before; narcotrafficking and violence derived from greater coca crop plantations: small towns country-wide were found with precursors and cocaine trafficking; violent deaths escalated due to anarchy, chaos and gang-related crimes.

He and his acolytes desperately want to remain in power, for fear of being prosecuted for the infamous waste of our resources on irrelevant “projects” and mostly for rampant corruption of this government, he fears to end like Lula, or Dilma.

This “caudillo” has been a major liar and has destroyed the concept of unity among all Bolivians!