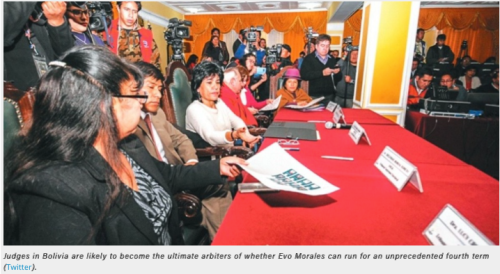 The fate of Evo Morales‘ reelection bid in Bolivia is still unknown, despite having been defeated in a national referendum in 2016; and now, candidates running for judgeships on the Plurinational Constitutional Court can not elude the question of whether or not they agree with the president’s re-election bid.

The members of the Supreme Electoral Tribunal (TSE) ensured that candidates for judicial elections will be able to speak at least “succinctly” about their plans and positions when they participate in forums and interviews before the judicial elections, but they avoided addressing specifically whether or not the candidates will be free to express their position on the issue of presidential reelection.

The newspaper El Deber consulted TSE President Katia Uriona about whether, for example, the reelection issue could be considered as part of the applicants’ campaign proposals. Without giving many details, she merely replied that the candidates must adhere to the rules.

She noted: “We are in the midst of an introductory period where we are getting to know the candidates. We expect the media to direct their questions and of course, inform the public interest, towards the proposals of the candidates. We understand that they will not be able to deal with other types of problems and issues that do not involve the re-election issue.”

Journalists asked TSE spokesman Antonio Costas about the re-election, and he replied: “I am part of a court; if I were to express a legal opinion on the re-election issue at this time, I would obviously have to recuse myself in the future, therefore everyone must carefully consider their statements, and how they are going to answer them.”

The TSE has clarified that there will be 96 candidates on the 20 ballot lists that will be printed for the judicial elections, which will take place in December.

Long-time socialist president Evo Morales lost a national referendum over extending his tenure to grant him an unprecedented fourth term, and is now pursuing new legal and political strategies in an attempt to maintain his power in the Andean nation.

Bolivian Thoughts opinion: Like most egocentric people, this person has relentlessly pursued re-re-re-election … does he fear trials, prosecution on his many wrongdoings? YES! … does he believe he should be Bolivia’s and coca growers president forever? YES! … does he care about the fate and well-being of Bolivia? NO!

Our democracy is in peril and it is about time we start rebuilding our nation!