Agenda 21F is born for a change of regime

They say that the manifesto is not limited to promoting a change of government, but “a change of regime”. 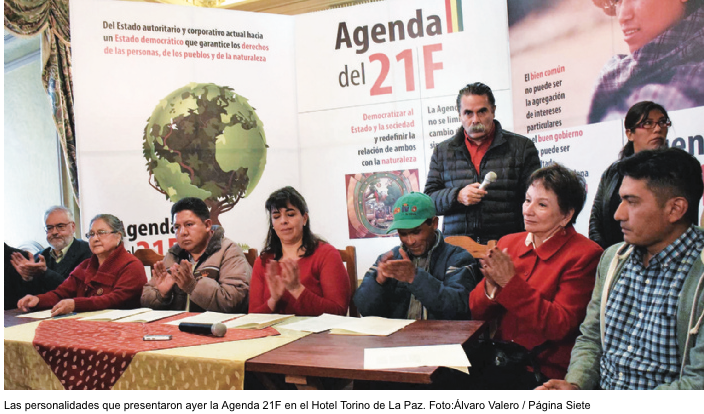 More than 180 personalities signed the Agenda 21F, which was presented yesterday. This document proposes a set of reforms and policies for a change of “state regime” starting year 2020.

The text states that “since there is no legal or political feasibility for the plans to perpetuate Evo Morales in power,” opposition organizations and the Movement to Socialism itself (MAS) must prepare for a new transition process.

Agenda 21F aims at the transition from the current “authoritarian and corporate” State, towards a democratic State, say the proponents.

In that context, Quiroga affirmed that all the actors of the political system must prepare for that process. “The way to prepare is to have an idea of where we want to go. That is what we have presented today: our proposal and in what direction the country should go in the next few years,” said Quiroga.

The proposals of Agenda 21F, among others, are: the creation of institutions such as the Ombudsman’s Office or the Economic, Social and Cultural Council; a national agreement for the reform of justice, autonomies and the fiscal pact; a new energy and productive matrix; the recognition of the void vote; the strengthening of intermediate cities and the definition of an independent international policy regarding the Venezuelan dictatorship.

On democracy, Agenda 21F calls for the complementary strengthening of representative and participatory democracy, and pluralism and citizen participation are advocated in the system of formation and functioning of powers, which are currently monopolized.

In turn, the document argues that no partisanship or “Government of social movements” are needed.

Manifest. The 21F Agenda was presented yesterday by a citizen movement. The document proposes a set of reforms and policies for a change of state regime from the year 2020.

We do not need to replicate the misfortune of Venezuela, we need to rebuild our nation, ease the pain we endured through political persecution, and distortion of our democracy.

We need to purge our Justice System and get it ready to put to trial all these corrupt politicians!

I firmly believe we need a unit front, to get rid off the masismo. One solid front to take out this ochlocracy, rebuild our Republic, ease the tensions among citizens, regions and after three years of that, call a new election where everybody could run for the presidency!