The government proposes the soy producers, the release of 60 thousand tons 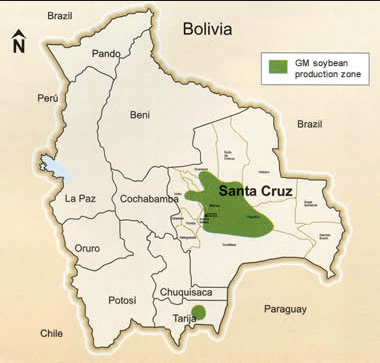 The government met with the soy industry producers to propose the release of 60,000 metric tons (MT) of soybeans. The industry argued that the volume is not satisfactory, because it does not cover operating expenses. [map obtained from the internet]

The proposal will be discussed in the cabinet of ministers.

Minister of Rural Development and Land, César Cocarico and Minister of Productive Development, Veronica Ramos, held a meeting with representatives of the National Association of Oilseed Producers (ANAPO) and the Eastern Agricultural Chamber (CAO).

At the meeting, the ministers proposed the producers to open an export quota of 60,000 tons, says a press release.

The approach was observed by the soy farmers and explained that the amount is not satisfactory, since the price of $210 per ton, the industry offers, do not cover production costs or investments.

ANAPO demands the full release of grain exports and promises to take care of supplying the domestic market. They say they are affected by the drop in grain prices and the effects of drought and floods.

Minister Cocarico said the meeting is a first step to find direct solutions and answers will be given the following week.

The restructuring of debts in the sector and the financial system was also analyzed; the authorities undertook to make arrangements with the ASFI; the use of biotechnology and reentrainment of the Rio Grande basin.

It is infuriating the behavior of this ruling ochlocracy! They are SO desirous for money, for taxes to waste … yet they still remains with their old-fashioned, incompetent, retrograde “state-controlled-development” vision that they only do harm!