The female wrestlers of Bolivia

The female wrestlers of Bolivia

They are like birds of paradise swirling around each other in a mating dance. Except their wings are layered petticoats and tasselled shawls, and they are not wooing but body slamming, hair pulling and landing flying kicks. They are the ‘fighting cholitas’, or cholitas luchadoras, female wrestlers in what is Bolivia’s answer to Mexican lucha libre. “The cholitas are indigenous women who were neglected because they were on the margins of society, but… since Bolivia has been ruled by Evo Morales, who has indigenous roots, they have gained more recognition,” Daniele Tamagni tells BBC Culture. The Italian photographer won a World Press Photo Contest prize for his photographs of the cholitas, images which have now been collected as a chapter in the book Fashion Tribes.

Frown, girl, in the ringThis photo shows Polonia Ana Choque Silvestre (known as Carmen Rosa la Campeona), and Julia la Paceña, who are best friends in real life and enemies in the ring. Carmen Rosa founded the group Las Diosas del Ring (Goddesses of the Ring), whose motto is ‘combine strength and violence with grace and elegance’. The cholitas started fighting professionally at the start of the 21st Century in the city of El Alto; Tamagni took these photos in La Paz in 2010. “Due to the rising interest in their dress, the cholitas have gained success in a masculine traditional sport like wrestling.” He believes the choreographed fights are a chance for the cholitas to establish their place for themselves. “In a way, they do a battle that is real, because it’s wrestling, but also metaphorical… in a macho society where men have the power, the women are respected when they fight,” says Tamagni. “Often the cholitas fight with men – it is symbolic of changes in Bolivian society – of identity, roots, and gender roles.” 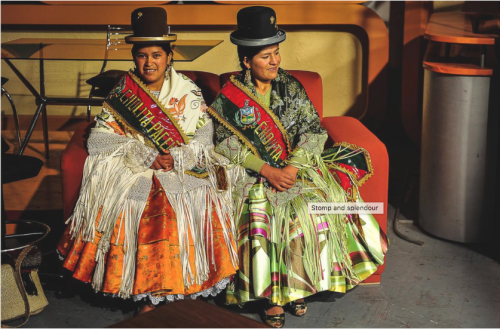 Stomp and splendourThese two women won the Miss Cholita competition, judged on how well they combine the traditional dress of multi-layered skirts (or polleras), tasselled cloaks, Borsalino hats and hair braids. “What interested me was the elegance, which in this case is related to their indigenous roots, in contrast with most South American beauty pageants, where the stereotype of beauty is more Western. In this case, it’s related to tradition and not a globalization of aesthetics.” That’s something Tamagni aimed to highlight throughout the projects brought together in his book, which features seven subcultures from around the globe. “With Fashion Tribes, I wanted to show the diversity in terms of identity of different cultures, particularly in the South of the world. These women represent how… you can have such a rich knowledge of tradition, elegance, identity.”