He cried and immediately Bolivia came to his mind when he won the gold medal in Brazil. He is sure that there is scientific potential in the country, but lacks support. 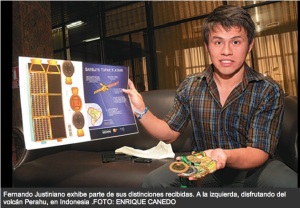 Fernando Justiniano Durán showed that the brain of the Bolivian people has the same as those of the foreigners, so it is possible to shine and place the name of Bolivia up high, outside the country. So did this young, 22 years old, student of chemical engineering at the public University.

His passion for astronomy began in 2006 with his preference for the area of physics. He was 15-years-old and was still in high school. That year, he won the right to participate in the international Olympiad of astronomy. Two years later he participated in the competition held in Indonesia. He remembers that to finance his tickets, he had to ‘beg’, because he did not have the resources. But this time failed to stand out, but far from being discouraged, he decided to prepare for the first Latin American Astronomy Olympics, made in Brazil, in 2009.

During the three months of vacation, he dedicated to study and to visit the Observatory for Tarija and La Paz to investigate further because his goal was to get the gold medal. As all sacrifice has its fruits, he won the first gold medal for Bolivia in astronomy. When he heard his name he couldn’t hold the tears and immediately came to his mind, Bolivia, his country. “I felt a connection with Bolivia and there assumed the commitment to help other students prepare for this type of competence, regardless of whether this work is recognized,” said this simple and intelligent young man.

Now, he prepares the Cristo Rey high school students to participate in competitions. For now this is only made with Cristo Rey, he would like to work with students from other schools. Also gives private lessons of leveling in the subjects of physics, chemistry and mathematics school, allowing him to earn some income for his subsistence.

But this gold medal is not the only achievement, at departmental level has won other gold medals in physics and chemistry, aside from more than 20 diplomas and recognitions of his talent that attest to his effort and dedication.

Fernando is convinced that the country has scientific potential which is necessary to exploit from the primary level, but lacks support. From fourth grade until he left high school obtained diplomas as best student, which is a source of pride for his mother, his sister and other family members.

Dreaming of a foundation

One of his dreams is to create a foundation to support students to compete outside the country. “When I think of Bolivia I know that there are many people like me, and in a future idealized for our children and future generations,” he said and took the opportunity to affirm that all his achievements were made possible by the help of God. He is Evangelical Christian.

I welcome Fernando Justiniano to The Hall of Bolivian Fame!! We certainly need more people like him!!