The process in the middle of the construction of the road that runs through the heart of the Isiboro Sécure reserve began in 2017 when the indigenous people denounced the violation of their rights in Germany. In 2018, a commission visited the region and verified the allegations 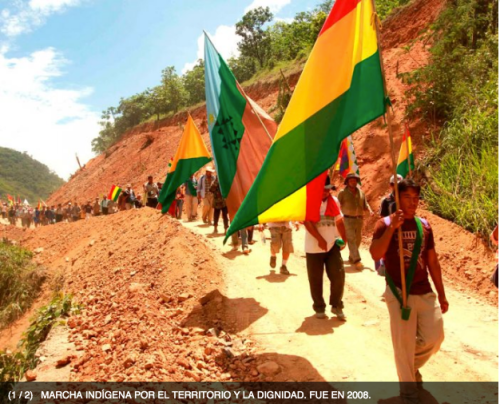 Next May 15, the International Rights of Nature Tribunal (IRNT) will announce the ruling on the claim of violation of rights of Mother Earth in the case of the complaint about the Isiboro Sécure Indigenous Territory and National Park (Tipnis ) where the government of Evo Morales builds a road that divides the heart of the ecological reserve.

The information comes from the page TipnisBolivia.org which is a documentary file of everything related to the problem in relation to the defense of the protected area Isiboro Sécure.

In November 2017, in the city of Bonn, Germany, the Tipnis indigenous sub-center and the Tipnis women’s sub-center reported to the IRNT that the rights to this Amazonian forest were being violated by the government of Evo Morales, with the annulment of Law 180 of protection of the Tipnis and the execution of works without studies of environmental impact in the area.

At the beginning of 2018, the IRNT issued Decision No. 1/2018, which agreed to consider the case of the Tipnis and decided to create an International Commission of Observers and Investigators to verify the complaint in situ. This commission visited Bolivia between August 15 and 23, 2018 and was integrated by Alberto Acosta (Ecuador), Shannon Biggs (USA), Enrique Viale (Argentina) and Hana Begovic (Sweden).

“We wanted to know what was the impact of the construction of the road and the environmental impacts on biodiversity, which apparently are evident. We already have data, information, photographs and other documents about these complaints. But we would have liked to talk with the indigenous people of that region,” said Alberto Acosta, member of the international organization.

In January 2019, the commission issued its report of the visit to Bolivia in which it states that there is sufficient evidence regarding current and foreseeable ecological impacts in the area: deforestation in the polygon seven; expansion of illicit coca leaf production; logging in the Sécure Alto; affectation to water generation in the area; affectation to forests, fauna and flora; destabilization of ecosystems; oil threat; impacts on the lives of indigenous peoples; attacks on defenders of nature; and institutional crisis of the National Service of Protected Areas (Sernap).

In its report, the commission recommends sanctioning the government of the Plurinational State of Bolivia for the repeated violations of the Rights of Mother Earth and other juridical bodies that recognize it as a subject of rights. This report was put to the consideration of the full court and this May 15 will be known its final verdict.

The IRNT is made up of male and female judges of recognized ethical and scientific authority regarding the rights of nature, appointed by defenders of Mother Earth from different parts of the world. The IRNT is an instance of civil society, with ethical character, which aims to investigate and rule on cases of violations of the Rights of Nature by international organizations, States, companies or individuals, in application of the provisions of the Universal Declaration of Rights of Mother Earth adopted in Tiquipaya, Cochabamba, Bolivia in 2010.