Colombia accepts to consult before IACHR on reelection [evo needs to understand and leave!]

Thanks to the mediation of former President Andrés Pastrana, the Pro Santa Cruz Committee was able to deliver the request for consultation to the Colombian President.

Colombian President Iván Duque received the Bolivian request yesterday for that country to raise before the Inter-American Court of Human Rights (Inter-American Court) whether the re-election of Evo Morales is a human right, the former president of that country said yesterday, Andrés Pastrana. Immediately afterwards, the Pro Santa Cruz Committee reported that Duque promised to comply with the request, after coordination with Brazil.

The press officer of the civic organization of Santa Cruz, Mauricio Melgar, informed that Iván Duque “instructed his foreign minister to make arrangements with the Government of Brazil so that together they can raise the consultation before the Inter-American Court.”

“Thank you President @IvanDuque for receiving today the request to raise advisory opinion to Corte San José on whether perpetual re-election is a human right. Colombia was the guarantor of a Constitution that today @evoespueblo violates in Bolivia,” tweeted Pastrana. 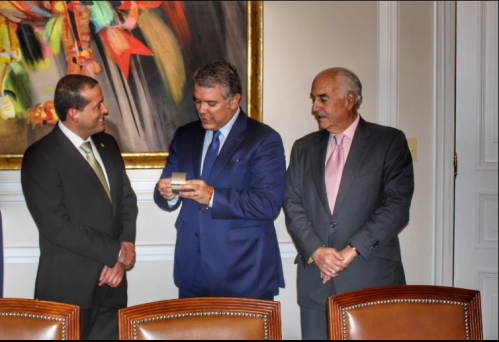 After this meeting, Camacho sent the following sentence that, according to him, Duque said: “Colombia is committed to making the consultations before the Inter-American Court and coordinating with the Government of Brazil so that the Court can pronounce itself (in this respect) as soon as possible and before the elections in Bolivia.”

“In a historic day for the defense of the 21F vote and Bolivian democracy. The president of Colombia, Iván Duque Márquez, undertook to make the request for an advisory opinion before the Inter-American Court, in order for it to determine whether indefinite re-election is a human right,” affirmed the Pro Santa Cruz Committee.

Melgar reported that Camacho also gave the President of Colombia the 500,000 signatures collected in Bolivia for the defense of the result of the 21F referendum, in which the majority of Bolivians said no to the re-election of Evo Morales, and that Andrés Pastrana remained as custodian of the 185 books with half a million rubrics.

According to the press release of the Pro Santa Cruz Committee, Camacho explained to the Colombian president that the Bolivian people are fighting because the rule of law is respected “with full democracy”.

“Bolivians have placed strong hopes in this consultation so that our struggle can be made visible to the world and with the support of the international community we can fulfill our objectives of living in a country where democracy prevails, where power resides in the people and where the rulers are real public servants and not their executioners,” said Luis Fernando Camacho.

The meeting of the Pro Santa Cruz Committee with the President of Colombia was made possible thanks to the efforts made by former President Andrés Pastrana, who said earlier: “Bolivians, you are not alone. The consistent democrats are still with you.” 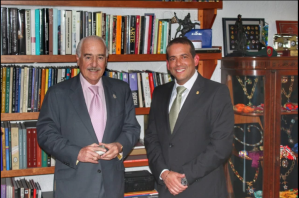 Political leaders thanked Pastrana’s efforts. “Thank you former president @AndresPastrana_ of COL, a coherent democrat and principles, which is managing with the government of @IvanDuque consultation with San Jose Court on perpetual re-election, which is NOT human right and Colombia today received thousands of signatures,” tweeted the former president Jorge Tuto Quiroga.

“Thanks to the president @AndresPastrana for this management with which he supports the Bolivian democratic cause. We are a people that fights for its democracy and for the respect of our vote. We do not accept that Bolivia will go the way of Venezuela and we will not give up on # 21F,” Óscar Ortiz wrote.

Yesterday’s request to the Government of Colombia was made because that country and Brazil are the guarantors of the implementation of the State’s Political Constitution promulgated in 2009, which provides for only one re-election for the positions of President and Vice President, and not indefinite as established by the Plurinational Constitutional Court, accused of being akin to the Government, based on the Pact of San José.

The same general secretary of the OAS, Luis Almagro, affirmed on Monday that the re-election “is not a human right.”