Sue Surkes reports for The Times of Israel:

Victim identified as Dor Jan, 23; fatal crash comes only four months after another Israeli biker died in the Andean nation. 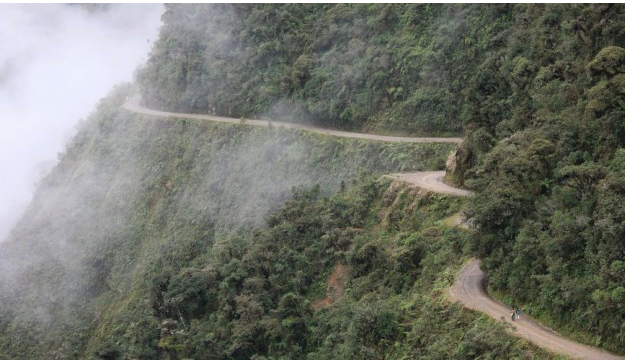 An Israeli citizen was killed Tuesday in a motorcycle accident in Bolivia, the Foreign Ministry said.

The ministry released a short statement saying the family had been informed and that it was working to airlift the body to Israel. No further details were provided.

According to Hebrew media reports, the victim was identified as Dor Jan, 23, from Kiryat Ono.

The fatal crash comes only four months after another Israeli met her death on one of the country’s roads.

In October, a 28-year-old Israeli tourist was biking on Yungas Road, popularly known as the “Road of Death” due to the prevalence of accidents there, when she began to experience altitude sickness. She died on the way to a hospital in the Bolivian capital of La Paz.

The dangerous Yungas Road is a popular tourist destination for Israelis and other visitors to the country. Since 1999, at least 10 Israelis have died in accidents there.

It wasn’t immediately clear whether Tuesday’s fatal crash happened on that road as well.

Though Bolivia remains a popular destination for Israeli backpackers, its president, Evo Morales, severed diplomatic relations with Israel in 2009, calling its treatment of Palestinians “a genocide.”

In July 2014, Morales declared Israel a “terrorist state” because of its war against the Hamas terror organization in the Gaza Strip, and required Israeli citizens to obtain a visa to visit.

The Yungas road in La Paz, Bolivia, is certainly a dangerous one, yet people continue to go there as it is just amazing!

I despise current government because of his absurd ties with certain muslim people … he admired Libia’s dictator, he is friend with Iran, Syria …. he is just a mad man.

Rurrenabaque was a great tourist business as hundreds of Israelis went there for tourism, after the book “Lost in the Tuichi” was written … this egomaniac president created more taxes that make tourist entry even  more difficult, he has killed the tourism industry in Rurrenabaque.