As a result of the departure of USAID

European Union calls for clear rules to invest in Bolivia 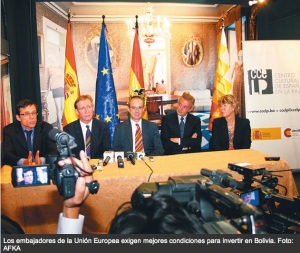 The EU recognized the United States as its main economic partner. The Europeans are on the lookout for new laws allowing them to ‘trust’ without worries in the country.

The diplomatic representation of the European Union (EU) in Bolivia lamented the expulsion of the country from the U.S. Agency for International Development (USAID), on the part of the Government because in addition to being an important cooperating partner of this regional superstructure, contributed much in projects in favor of the Bolivian people. In addition, they asked that the country issued clear rules that ensure the arrival of investors. [is this alone is a serious evaluation of current government’s policies, I don’t know what else could be?! and Bolivian citizens still want to re-re-elect current president?! come on!!!]

In his speech for labor day, Wednesday, May 1st, President Evo Morales publicly announced its decision to expel USAID, which was accused of interference in peasant unions against his Government and called on Foreign Minister David Choquehuanca to prepare notification to the Embassy of United States in La Paz, with the announcement of the expulsion.

“We regret this decision because the US is a privileged partner for the European Union. We regret a little to stay by ourselves in the field of cooperation in Bolivia. What did USAID is beneficial for Bolivian citizens and we could not replace what they did,”said yesterday, the EU Chargé d’affaires in Bolivia, Alain Bothorel. [couldn’t agree more, having worked with a binational donor and coordinated with other binationals and multilaterals for over 20 years in Bolivia, I know that USAID was by far the most important donor in country. Other binational and multilateral cooperation did speak a lot but disbursed little. Most of multilateral cooperation was channeled thanks to the vote and money of the USA, in general and setting aside the wrong remarks against the USA and capitalism, the support that USA gave to Bolivia was by far an important element to fight poverty and allow small and micro entrepreneurs to reach competitiveness]

The diplomat referred to the topic before the media at the Government Headquarters, in a ceremony that commemorated the day of Europe, with several ambassadors of the Nations of the old continent in Bolivia. Bothorel noted that United States and the EU are and will continue to be very good partners, despite the stalemate with Bolivia. [while Bolivian government relentlessly and stubbornly aligns with Venezuela, Cuba, Iran and formerly with Syria and Libya, where are we going with this government?! To make things worse, Bolivia has embarked in a dispute with Chile in the International Court of Justice and we are pushing away our natural and most powerful allies in that arena… this is not the time to send conflicting signals to the UE and to lose the support of the USA is just plain stupid!]

On the other hand, the diplomats of European countries also argued that Bolivia has all conditions for interested foreign capital in investing in Bolivia, but it is important that the Government will issue signals that will be respected. [so far nothing like that happened and the egocentric and cockiness of current president prevents for a change in political behavior, let alone security that international laws will be enforced]

“Bolivia is in a situation of economic prosperity, but needs industrialization and services. That is, it meets all the conditions to make investments. If there is no so many investments is because perhaps the regulatory framework still leaves doubt. The Bolivian Government depends on effectively investments come. We are expectant to see how the regulatory framework turns out to be,”said the Ambassador of Spain in Bolivia, Angel Vasquez.

Europeans expect the new legal framework giving needed assurances for investments in the future as the enactment of the Investment Law and related laws such as the hydrocarbons, arbitration, banking and other economic matters. “At the same time, required a conducive political environment”, ended the diplomat of the Kingdom of Spain

Since 2007, the EU cooperates to Bolivia with around one billion euros and will do so for a period of seven years.

The Government and the EU scheduled a new cooperation for the 2014-2020 period. To do this, Europe wants Bolivia to propose its priorities. [in my experience the donor community sets aside the funding but depending on the sound priorities of the government, it will receive that funding… that means the government must have productive/well prepared professionals and not just political affiliates who have more experience in labor union conundrums and some self-called intellectuals who haven’t assimilated the end of the USSR and the real economic structure of China. In short, the money is there but no assurance it will get to the Bolivian people]

The EU hopes to decide a cooperation program, according to the multinational Agenda towards 2025.

Europe claims to be satisfied with the statements of the President, that there is full provision of welcoming foreign investments in Bolivia. [very diplomatic statement]

They want to modernize the anti-narcotics fight

The European Union (EU) is committed to Bolivia, to join efforts in the fight against drug trafficking, within the framework of shared responsibility. To this end, it has an interest in improving this struggle through technology transfer.

The Chargé d’affaires of the EU, Alain Bothorel said. “For Europe, it is a priority to support Bolivia in its efforts to fight against drug trafficking. In the future, we intend to continue in this field and also, provide technical assistance to the institutions of Bolivia for this commitment”, said.

He said that in the last five years they have cooperated to Bolivia, with 80 million euros. “We will continue our support at that level,” said the diplomat in Bolivia.

The following link is for Pagina Siete’s report:

In sum, the diplomatic message in between the lines reads: current Bolivian central government needs to do much, much better!!

2 thoughts on “If this not a serious and solid criticism over current Bolivia’s gov doings… I don’t know what else could it be?!”