Bolivian salaries only enough to feed our families… and the rest…?!

Evaluation on the unequal distribution of the income

Cedla: wages in the country just enough to eat

Reality. Worker’s wages in Bolivia spends more on food and has 39% incidence in the basic basket. 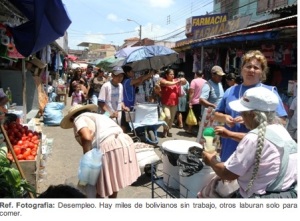 An evaluation of the Center of Studies for the Labor and Agrarian Development (Centro de Estudios para el Desarrollo Laboral y Agrario, Cedla), with regard to the wage replacement to workers in the order of 8% and 20% of the minimum wage national throws as a result that “the reality of the worker wage in Bolivia is that it spends more on food and has 39% incidence in the basic family shopping basket”.

“The reality of the worker wage in Bolivia is that it spends more on food (the component with more weight in the basic family shopping basket, with 39%). Half of the households at the head of a worker or an employee could cover the food of his family, but at the expense of not being able to guarantee the satisfaction of other basic needs”, says in one of its results.

They see an unequal distribution of income. To December 2011, the cost of the basic basket calculated by Cedla, was set at Bs4,534 per family; “i.e., that meant that workers’ income could barely cover 44% of their family needs, and employees could only cover 55% of the basket”. “Following a trend that began in previous years, the 2011 households with heads of household employees already had household income below the average (Bs3,609). Half of the households of workers only had a family income of Bs2,000 or less, and half of the homes of employees had Bs2,500, or less, with an average of two employed [per household] in both cases,” notes Cedla. In view of the described scenario, the Center for research in labor issues notes that “recent wage increases, which reiterate the old policy of wage restraint deployed from long ago, do not contribute to improving the quality of employment of workers in the country”. “Follow the path of making unstable work and contained salaries, only serves to perpetuate the poverty that originates in the labour market”, warns.

The economy grows and wages increase, but slowly

Cedla analysis found that while the economy grows, wages increase slowly in some cases and stagnate in others. “This could only mean than earnings increase”, he says.

The distribution of disposable income between capital and labor shows that the part that stays in the hands of employees continued to decline to 26% on 2011. “The constant decline in wage participation by almost 10% since the beginning of the last decade means that the rate of exploitation is on the rise in the country, explaining the slow wage developments,” says the Cedla in its analysis.

Competitiveness and market demands, ergo price paid to Bolivian produce are also determinant to the wages’ structure. Lack of coherent public policies to attract capital investment and opening new markets are almost non-existent. Instead, current government donates rice to Cuba, sets export quotas to soy, sugar while importing rice from Argentina. In sum, food security for Bolivians is in peril and so is the capacity to earn appropriate wages.