Quinoa is incorporated into the tables of the world

Present in thousands of recipes, whereas in typical or exotic dishes, this grain has become a priced ingredient, both for its flavor and for its nutritional content. 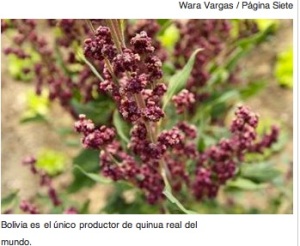 Quinoa has crossed borders never imagined, even form part of the diet of the astronauts and thanks to its nutritive power is an international gastronomy gourmet ingredient: not only is used in the creation of new and creative recipes, but as an ingredient adapted to the typical food from a myriad of countries throughout the world.

Quinoa conquers territory between the most popular and up to the most exotic of the gastronomy of each nation: there is not a dish that can resist the charm of this Andean product. After reviewing the hundreds of thousands of recipes that are in books, publications, and web pages, it is difficult not to conclude that the Golden grain has become as the more chameleonic ingredient of the Andes.

The list seems endless: African, Lebanese, Spanish, Thai, Italian and almost all cuisines of the world dishes have been experiencing, and continue to do so, with this so-called pseudocereal.

The author of several books on the subject, like “Quinoa Bolivia: gastronomy and landscape”, Rita de el Solar, the Golden grain received the impetus from the international cooperation and non-governmental organizations to be known in the world.

“Once they knew it outside our borders, they have loved the quinoa. For us it was a daily meal; What happened is that nobody thought in preparing it in a sophisticated way and now is made in thousands of luxury forms”, explains.

Famous for its food, especially protein – important properties which outweigh its nutrients to the milk and the fish -, the year 2013 has been declared by the United Nations, and ratified by the Organization of American States, as the international year of quinoa.

The Chameleon of the Andes

Until the 1970s the grandmothers and mothers who cooked, in Bolivia, the pesqhe or the phisara not imagined that humble quinoa would inspire national chefs and from around the world, who adapted it as well known as the paella, sushi dishes and European salads.

At present, a more exotic version of the Italian risotto, rice-based, has become “quinotto” with quinoa and is prepared with various sauces, sweet and salty. It is easy to find this Andean grain in Tabbouleh, typical dish of the Lebanon, or next to Senegalese delicias and up as fill or mass of the traditional Mexican tacos.

What makes it so special and adaptable? The international chef and author of the book “Culinary reflection of the Lipez. Variations on Royal quinoa and llama”, Pierre Van Oost, recalls that the first time he cooked with quinoa was not in Bolivia, but in Germany, where it was already known in the 90s.

“Being a grain, quinoa is adaptable to almost all the dishes again. For example, all those who are made with rice can replace this grain with quinoa. However, any adjustment is made through research about its preparation”, says Van Oost.

Chef Hugo Chavarría says that the popularity of this product is also due to its nutritional qualities, which outperforms other grains, for its high content of proteins.

“Discover their health benefits has been another feature that helped make it so known, especially the Royal quinoa, which is only produced in Bolivia”, adds.

The President of the Association of Chefs of La Paz, Anahi Reyes, adds that global cuisine has included the quinoa thanks to increasing exports of the product and its taste. “Its flavor is somewhat neutral, enough as to combine it with the ingredients for recipes of any country”, affirms.

As long as the celebrations of the international year of quinoa are added, some near or far country table, taste a dish with quinoa. An ingredient which, as Rita de el Solar asserts, “is infinite”.

One thought on “Our Bolivian Quinoa to the world!”