For daily followup use this page Dakar Railly 2013

Bolivians are ready to compete in the Dakar Rally 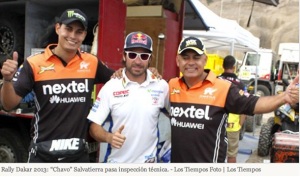 Bolivian pilots passed the technical review in the Village Dakar in the Green Coast of Magdalena, Peru, and remained willing to confront the 35 race issue of the Dakar Rally, whose startup is planned for tomorrow [January 5, 2013] with 459 motorized 459 contestants.

Juan Carlos “chavo” Salvatierra (motorcycles), Miguel Ángel Zambrana (T2), Marco Bulacia (T1), Luis Barbery (T1), as well as Leonardo and Diego Martínez (quad) are the Bolivian competitors that will tomorrow begin their race in the fifth version of the competition in South America.

A few hours away from the 35th Edition of the Dakar Rally which will link Peru, Argentina and Chile, the start of the day, yesterday, was very hectic for Juan Carlos “chavo” Salvatierra, who began the day with the Honda CRF 450 X Dakar motorcycle tests and culminated with the ramp in the Village Dakar, to then enter the Parc Fermé, where the bike will stay until dawn tomorrow, day that starts the test in which the crucian [citizen from Santa Cruz] pilot will take on their shoulders the illusion of more than nine million Bolivians, who expect to see him arriving in Santiago de Chile among the 20 best in the general classification of the motorcycles.

The day for “Chavo” began when Lima was still in the shadows. The pilot left the Mariott hotel to arrive at the bivouac, together with the mechanics of the Europe Honda Team to go together to the chosen area where they performed the last test on the bike.

“We have done several kilometers and all is well”, said pilot upon arrival at the camp where after a couple of minutes began the administrative inspection that took until past noon receiving and signing the series of documentation required by the organization.

With all documentation in order, the pilot then took the machine to the sector of technical inspection, prior to that, his team placed stickers of the companies that made possible the presence of “Chavo” in the Dakar Rally.

Leonardo Martínez and his son Diego are also ready for the challenge. The Bolivian binomial will compete in the specialty of Quad.

“We’re now more relaxed, well because we have met all the technical requirements and now we can only expect the order to start”, stressed Leonardo.The Bolivians are ready to compete in the Dakar Rally.

Bolivian with different objectives in the Dakar Rally

Salvatierra wants to win his category in motorbikes; Bulacia, to be on the top 20 in T-1’s cars; and the other four: Luis Barbery, Miguel Zambrana, Leonardo and Diego Martínez, arriving in Santiago 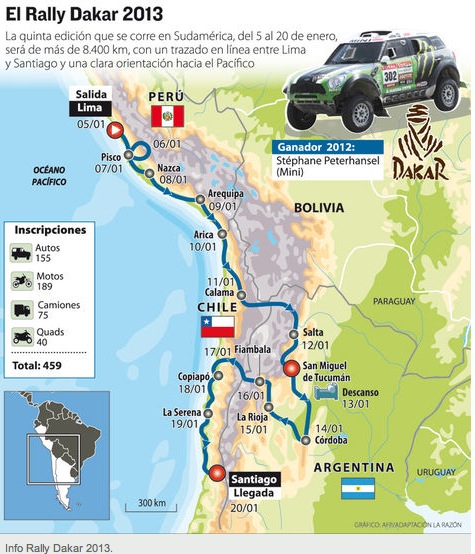 The six Bolivian pilots have different objectives for the 35th Edition of the Dakar Rally. Juan Carlos Salvatierra wants to win the Super production of motorbikes category; Marco Bulacia aims to finish in the top 20 in the general classification of the T-1 group of automobiles; while the other four national representers: Luis Barbery, Julio César Zambrana, in cars; and Leonardo Martínez Saucedo and Diego Martínez Dimetrys, in cuadratrack or quad, have looked after, as their primary goal to finish the race and arrive to Santiago. However, everyone wants to place high the name of the country in what is considered the hardest and difficult race in the world.

“Chavo” Salvatierra – the most experienced of the Bolivians in the race, it will be his third consecutive participation – has clear goals: wants to win the Super production of the motorcycle category. Before traveling to Lima, he said that increasingly comes better at the competition, “because every year there are more experiences added, kilometers and hours of flight”. Salvatierra will bear the number 50.

Bulacia, who will run on the T-1 category of cars, is eager to start the test and finish among the top 20 in his second participation. Winning the Dakar is not an immediate goal: “I aspire to win, but I’m not obsessed; if not given this year, I keep trying for another ten years”. The organization assigned number 399 to Bulacia, who will have the Spanish Oscar Montaño as navigator.

It will also be the second participation for Luis Barbery, this time in the T-2 production category. His car will have the number 424, and his navigators will be Hernan Daza and the Brazilian Roldán Lourival. His goal is to finish the race. “We’re very excited. We are going to compete with a very competitive vehicle and tough, so we see very favorably the possibility to realize the objective of reaching Santiago successfully. The Dakar is a competition completely different from the other ones, therefore for this edition we prepared much better. The experience of Lourival (Roldan) and the enthusiasm of Hernan (Daza) makes us a team loaded with illusion”.

Cochabamba businessman Miguel Angel Zambrana, who will have as Navigator the Argentine Ezequiel Queralt, will make his debut in the competition. The goal: reaching the end. It will put into practice everything he knows, although he is aware of how risky that is to run the Dakar. His number is 457.

Finally, Leonardo Martínez (276) and his son Diego (287), who will participate in Quad, also are aimed at reaching Santiago. This year they gained experience by participating in the Dakar Series, in Argentina, and the Atacama Rally, in Chile [formerly territory of Bolivia]. “From amateurs we turn to professional pilots in a short time”, said Diego. He said that “our goal is to complete the rally and reach the finish line. We want to do our own race. 80% of the beginner pilots do not arrive, we want to be within the 20% “.”

Cécile van Hattem, the one responsible for the Europe Honda Team, the team of Juan Carlos Salvatierra, said the Bolivian pilot is considered to be the “number one”.

“Juan Carlos is the priority for the team, we focus on him all the hopes that he will win some stages and finish the Dakar among the best 20,” said Van Hattem.

The Bolivian delegation integrated by Juan Ramón Quintana, Minister of Government; Pablo Groux, Minister of culture, in addition to Armin Franulic, President of the Febad (Federation Boliviana de Automovilismo Deportivo), will meet today in Lima with authorities of the ASO (Amaury Sport Organisation), entity which organizes the Dakar Rally, to talk about the possibility of the country to be included in the route of 2014. [it could be THE political trophy for current government during that presidential election year…, given that “priority” and current government’s “style” Bolivia is in greater condition to host this race, just hope it does not get tainted with cheap politics!!]

Franulic, yesterday from the Peruvian capital, announced that it is expected that the meeting with Etienne Lavigne, President of the ASO, and his collaborators is carried out at noon. Motorsport leader arrived yesterday to Peru, while the arrival of government authorities is scheduled for this morning. During the meeting, it is expected to be defined that Bolivia is part of the rally, in its sixth version in South America.

The suggestion of the Organization will be that the competition enters the country from the South, the Bolivian Chaco. As expressed by Minister Groux, that position will be accepted and will ask that the route includes Santa Cruz, and that the day of rest takes place in that Department.

In addition to the meeting with the ASO, and meetings with Peruvian authorities of tourism and sport, the Bolivian Ministers and the sports leader were invited to the technical and administrative inspection, and also to the start which will occur tomorrow. Franulic told that yesterday was reunited with some of the Bolivian pilots: Bulacia, Juan Carlos Salvatierra and Luis Barbery, because the rest carried out administrative procedures. “Everyone is in good spirits,” he said.

The stages of the Rally

According to the Organization, pilots will experience difficulties in the Peruvian dunes curve since the early days, and will be put under pressure until Tucumán.

I wish our Bolivian champs success!!