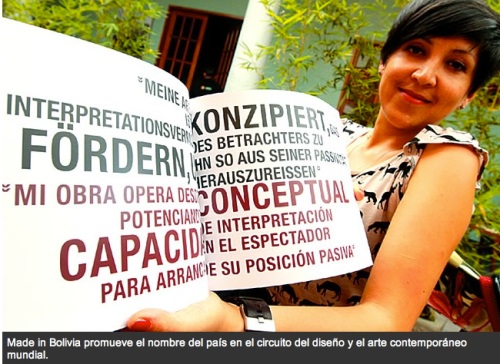 Motivated by the completion of her studies of graphic design in Germany, Paola Campuzano, Bolivian artist and designer decided to inquire into the visual identity of the country.

“Made in Bolivia is the first book that portrays the contemporary artistic movement and graphic design taking into account the influences and traditions reflected in the capacity and the Bolivian aesthetic virtues from an intercultural perspective” said the author.

Urban art, advertising design and political propaganda in the book give account that visual production is brewing between the street and the Academy.

“I started with the search for a Bolivian visual identity. All national artists told me that that identity did not exist. On the contrary, when I showed the book in Germany or in other countries, they DID recognized identity. For them there is a common denominator. The Bolivian designer expresses, is free. Compared to other countries we have an own, colorful and experimentation with identity,” remarked.

The book has three chapters: red, yellow, green. The first two are introductory on the folk influence and urban art. The third emphasizes the contemporary, and includes interviews. It stands out for its white cover, which according to the author, “is a way of expressing an identity”. Campuzano studied graphic design in Santa Cruz. She did postgraduate studies in Germany where she has her residence. Now she makes editorial design and drives her career towards mobile phones’ applications

Made in Bolivia was released in Germany as a way to place Bolivia in the art industry and the design world.

The book had a circulation of 250 copies. It can be acquired at Kiosko Galeria (Bolivar # 246, Santa Cruz)

Kudos to Paola Campuzano and wishes for a wonderful career!!