Along with the Cerro Rico of Potosi, the Madidi Park, and the Titicaca Lake are the most famous sites that Bolivia has. All three of them are under serious peril, and this government does nothing to stop/prevent this!

In the absence of protection policies

• Experts assure that microbiological contamination generated by sewage water from nearby cities exists in the smaller lake.
• Thousands of liters of water contaminated with high organic discharges leave the liquid without oxygen and emanate deadly gases for species and humans. 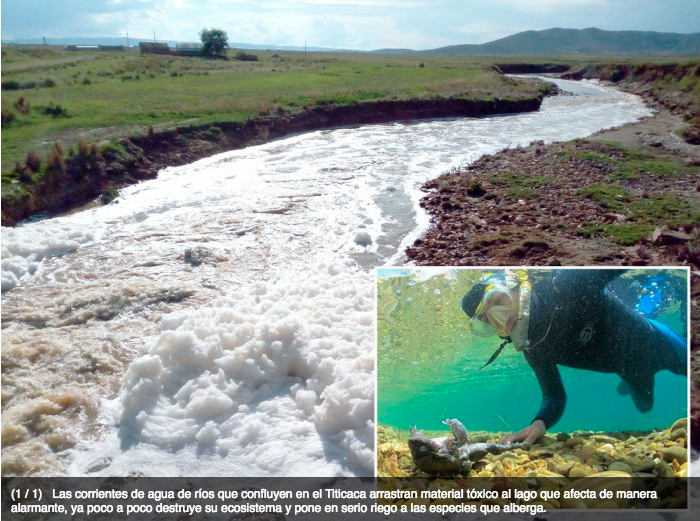 The Titicaca, the highest navigable lake in the world, with more than eight thousand square kilometers, suffers the effects of organic discharges that enter Cohana Bay, plagued by bacteria that alter the functioning of aquatic ecosystems and lower oxygen concentrations, causing the loss of habitat of different species.

Experts maintain that in the smaller lake there is a microbiological contamination by sewage water that contains substrates, nitrates and phosphors that alter their microbial activity. For the head of the Limnology Unit of the Institute of Ecology of the Universidad Mayor de San Andres (UMSA), Rubén Marín, the contamination in Cohana is considered to be highly eutrophied since it is “enriched by the organic discharges (domestic wastewater) that is they mix with other industrial waste pollutants.”

Meanwhile, the Director of the UMSA’s Biology School, Darío Achá, said that “the main sources of contamination are sewage water with high loads of human urine and feces containing substrates, nitrates and phosphorus that alter the microbial activity of the lake”.

On the other hand, the director of the French Development Agency (AFD), Rémy Rioux, expressed the intention of investing $115 million dollars in Bolivia to promote the decontamination program of Lake Titicaca.