Bolivia needs and demands an environmental audit in Bulo – Bulo!

Humongous investment, on a plant that could have never been built there, and without proper water treatment?! only under the worst ochlocracy that was possible, licenses and permits issued without law compliance! evo and his acolytes do not only waste our money but seriously damage our environment!

We also know that evo who went on a boondoggle trip to Russia, to just watch the football world cup, had signed there an agreement with Acron, a Russia company that will build a similar plant in Brazil, using our gas! Incompetence and damage to our nation is more than evident under the coca caudillo regime! 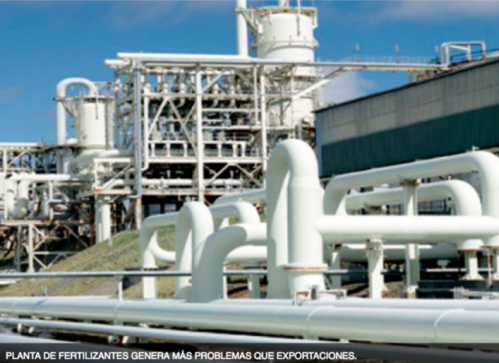 Given the evidence of pollution with ammonia caused to the Quebrada Muñecas stream in the Entre Ríos municipality, where fish mortality and affectation of fauna were generated, Senator Óscar Ortiz (UD) requested a request from the Comptroller General of the State (CGE), an environmental audit to determine the magnitude of the damages caused by the urea and ammonia plant that does not have a wastewater treatment system.

“I have been confirmed by different experts, who know the plant inside, that the main reason for the contamination is that there is no industrial water treatment plant. It only has one tank for precipitation, so that the impurities settle to the bottom, and a mechanical filter. This is insufficient to purify the more than 100 chemicals that are involved in the process of producing ammonia,” he said.

According to the legislator, while the ammonia and urea plant does not have an industrial water treatment plant, the contamination will advance. “Nobody can understand how they have built a plant of almost $1 billion dollars without installing a water treatment plant and how the Environmental Ministry and the Government of Cochabamba have granted the environmental record and authorization to start operations without a processing plant,” he questioned.

For this reason he said he submitted a written request addressed to the Comptroller General of the State, Henry Ara to give course to the environmental audit, since the contamination can cause a major damage considering that the waters of the stream flow into the Bulo Bulo river, then they connect with the Chapare and Mamoré rivers. “We can be contaminating the tropical and Amazonian areas that are very rich in fauna and flora,” he said.

The opposition legislator who warned permanently the stoppage of operations of the urea and ammonia plant, a total of three times in less than a year, also questioned that a plant that cost the State almost $1,000 million has only exported three months to Brazil at a rate of 12 thousand tons, equivalent to 20% of monthly production capacity.