Santa Cruz de la Sierra was considered the fastest growing city in South America (70s – 80s) and as such now carries the more entrepreneurial society in Bolivia. Santa Cruz Department is credited with the production of close to 70% of the food in Bolivia … nevertheless, it is also striking to see how weather has changed due to the fastest, uncontrolled growth. The map below only highlights the current damage, and there is nothing in terms of policy or even awareness at the society level on how to live sustainably.

We do not care about forestation, we deplete our water sources and the weather is hotter and windier than before in lovely Santa Cruz.

It is said that currently, 2018, Santa Cruz de la Sierra has condos, urban land to hold an additional two million people?! Citizen’s growth is not that large nor immigration from the west side of Bolivia could be enough to fill that space. SO, the question is how could we have ended with such housing capacity?!

In Bolivia we always say that the best investment is on real estate … however, that could nor account for all the deforestation that is taking place. Where is money coming from? … narcotrafficking, smuggling and corruption are the main sources for money laundering that ended on this debacle. Aside of that, all that over supply is going to lower the prices on current real state, thus, affecting the local economy.

We must take action to control this delusional deforestation, before is too late …

The above is the opinion of Bolivian Thoughts 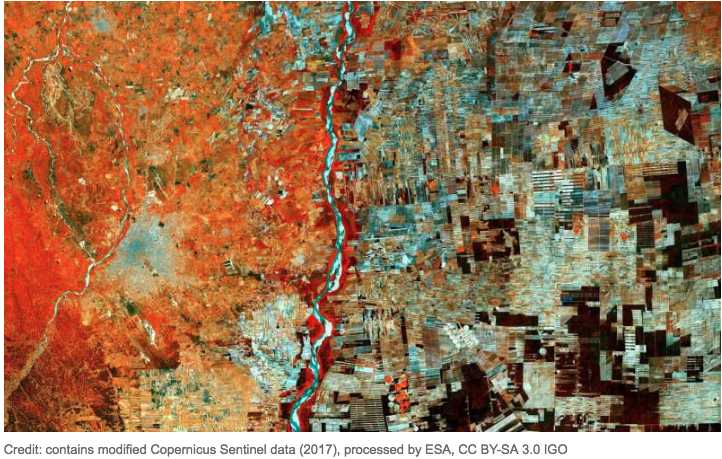 Marking the International Day of Forests, this Copernicus Sentinel-2 image shows an area of Bolivia that was once covered by trees but has now been cleared for resettlement schemes and agriculture.

Bolivia’s city of Santa Cruz can be seen at the mid-left. One of the fastest growing cities in the world, this important commercial centre lies on the Pirai River in the tropical lowlands of eastern Bolivia. To the east of the city, and particularly east of the Guapay River, or the Río Grande, a huge patchwork of agricultural fields can be seen. Back in the 1960s this was an area of largely inaccessible thick Amazon forest. However, as an area of relatively flat lowland with abundant rainfall, it is suited to farming.

As part of a drive to develop and improve the economy, there has been rapid deforestation since the 1980s to accommodate programmes to resettle people from the Andean high plains and develop the area for agriculture, particularly for soybean production. This has resulted in the region being transformed from dense forest into a large mosaic of fields. As well as countless rectangular fields, radial features can be seen where individual farmers have worked outwards from a central hub of communal land.

This image was captured by the Copernicus Sentinel-2A satellite on 30 September 2017, and processed in false colour.