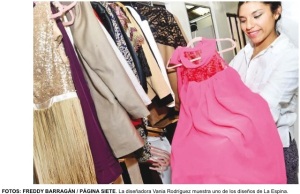 The young designer Vania Rodriguez created a brand with a different vision. Her subtle designs are modern and lead in its seams more than stitches, carry details of Bolivian roots of who creates them. La Espina [thorn] is a women’s fashion brand created by Vania Rodriguez in early 2014 that has rapidly gained acceptance from an audience that does not find in the Bolivian market a different option.

“La Espina is like that part of the stem, less beautiful, quotation marks, as it is generally removed or ignored. Then that’s a feature when working away from the obvious, typical. Interested in the display of Bolivian identity, but would not use aguayo [mantle] or alpaca, prefer to think of something else,” Rodriguez, 24, explains.

In 2012, Rodriguez graduated in Fashion and Textile Design at the Universidad Argentina de la Empresa in Buenos Aires. Later did internships in various brands of the neighboring country, but eventually realized that there was an oversupply of clothing.

“I got to thinking that here in La Paz there is demand for something like what I wanted to do, because there is still a brand that offers different urban clothing. Most clothing is brought to Bolivia by people who travel to other countries,” explains the designer.

Her parents decided to support her if she returned [I know the feeling…], having not yet finished coming to La Paz in September 2013 and when did they first seek designs for weddings and proms. To the early beginning, her sister Monica, economist, joined the venture.

Her workshop is organized and neat, some of her designs are on manikins. That caters to customers who started with friends, contacts and now through social networks.

For the designer it is important subtlety in the details, an example of this is his first collection “Lineage” inspired by the Afro-Bolivian culture.

The hems of skirts moved to long skirts and white garments, the same happened with shirts. A designer is also interested in evoking the typical Bolivian dance without moving the clothing as it is but giving it a creative twist.

So lace skirts to tops or shape sleeves from the male costume in the dance of Caporales [foremen] become the inspiration for jackets with a very urban and elegant touch move. She did the same with pants. And even the royalty of the afro-bolivian community inspired a cape.

The “Lineage” collection had 400 designs. Another peculiarity is that the creations are unique, the details provided vary, the fit or fabric.

In her workshop, the designer gives personalized attention. A great demonstration of her understanding of the female body in the Bolivian context is created molds with measures ranging according to women in the country.

Veronica Montes is one of the customers of La Espina. For her, the brand has its own identity which is combined with what the person wants, who will wear the garment.

“I think that unlike many new designers in our country, has its own interpretation of fashion and that was missing in Bolivia,” she says.

To bring her creations, Rodríguez get fabrics from Argentina and Peru, but also looks at least twice a week materials in the local market.

Currently, Rodriguez is working on her next collection inspired in the Pujllay. The end of October this year, La Espina atelier will open a store in Torre Ketal, Local #5, 15th street, Calacoto.

“It’s risky to establish a venture in Bolivia fashion, but we really have found much demand for different designs,” says the sister and partner of the designer, Monica Rodriguez.

Gladys Vargas studied dressmaking and tailoring as well. She is responsible for realizing the designs of La Espina.

For her, her work is fun because she always does something different. “When I worked elsewhere did the clothing in series. Here are the details, fabrics, everything changes,” she says.

One way to do only women’s fashion and urban designs that carry the subtlety of the Bolivian identity, in the future is expected to become an iconic brand in the country.

Costs. According to the designer Vania Rodriguez, creator of La Espina, it is useless to make designs that anyone can acquire, it is to be competitive in the market and add value to the Bolivian creativity. A blazer costs about Bs400, and the tops are priced at Bs150. Custom clothing, of course have a higher cost.

Kudos to La Espina and welcome them to The Hall of Bolivian Fame!