FILM IS DIRECTED BY THE AMERICAN DAVID FINCHER 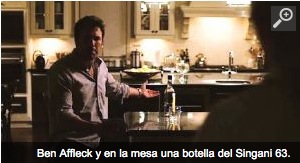 The drink is marketed by Steven Soderberghse, who last year was captivated by the taste and now he sells in the USA. For several minutes, the American actor Ben Affleck drinks a glass of Singani 63, of Bolivian origin and prepared by Tarija’s winery Casa Real that sells in the United States.

That image was perpetuated in a scene from the recent movie Gone Girl [perdida] of the actor who also won the Oscar prize, directed by David Fincher and was released in theaters in Bolivia and other countries.

In June 2013, the American filmmaker Steven Soderberghse (Oscar winner for Best Director for Traffic) became enthralled with the taste of Bolivian singani. Then he decided to make a deal with the Casa Real company from Tarija, -with intermediation of his friend, Bolivian director Rodrigo Bellott- and exported the first batch of bottles of the best varieties of distillate that in the United States is sold under the name Singani 63. “Although the owner of this trademark is Soderbergh, the appearance (the Bolivian singani) in the recent box office film is due to a breakdown engineered by his friend, the director of Gone Girl, David Fincher,” reads a press release.

Gone Girl is an adaptation of the book thriller by novelist Gillian Flynn. Since its release last week, the film leads domestic box office and has already raised more than $26.8 million.

The film tells the story of Nick (Affleck), a married former jounalist with Amy Dunne, who mysteriously disappears on their anniversary.