Fall in the price of gold results in laying off 185 miners, it is just starting…

ABOUT TO SUSPEND OPERATIONS

GOLD FALL LEAVES OUT in the STREET, 185 MINERS 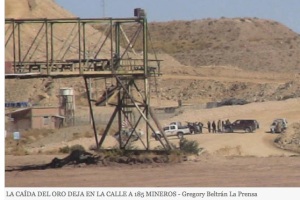 A total of 185 gold miners from the company Inti Raymi, Oruro, received letters of notice. Entrepreneurs told them that the decision to dispense with their services is due to the falling price of gold.

The price of the precious metal seemed to experience a rebound by the dispute between Russia and Western nations for the Ukraine crisis and conflict in the Middle East, but the strengthening of the stock exchanges and the dollar, in addition to the physical demand slack from China and India, overshadowed the possible advance.

Gold futures business for delivery in December, fell a few days ago to $1,272 a troy ounce, but yesterday the price reached $1,239.96, the report of the Central Bank of Bolivia, prompting fears that the trend low remains constant.

The leader of the Federation of Mine Workers of Bolivia, Miguel Pérez, said Inti Raymi is about to disrupt operations for two years, but he also acknowledged that other businesses face some problems paying double bonus, especially those smaller units and did meet others who suffer deficits, such as the Unified Enterprise Mining Company (EMUSA), which operates in the department of La Paz. While some are also economic problems of Unified Tupiza and other company operating in the department of Potosí.

It is known that the company Inti Raymi reached its top when working with 700 workers produced about 300,000 ounces, but it had similar problems when I had only managed to extract about 50,000 ounces, so it is not a new problem.

What is worst in the future is the lack of understanding of current coca growers ochlocracy over this type of situations. Cheap demagogue and wastefulness of over $120 billion dollars without investment on sustainable development and value added production is going to hit us hard.

I do not understand why there are still some Bolivians who continue to vote fir this “leader”… we wasted our best economic moment in history. Macroeconomics may look OK but the reality is that inflation, narcotraffick and smuggling has driven the prices up. Before this government, nine years ago, a kilo of meat cost Bs14 and now is more than Bs40… need say more?