Alberto Medina, the Andean Picasso, a life devoted to art

Alberto Medina, the Andean Picasso, a life devoted to art

This master painter and muralist from Oruro, aside of creating techniques and innovate his style, was also an actor, poet and revolutionary. 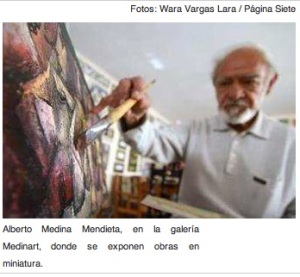 When Alberto Medina laughs, he does so with the soul, as when it takes a brush between his fingers and gives free rein to his creativity. So is this Oruro painter and muralist: passionate about art which, far from being his main work activity, marked the rhythm of his life for more than half a century.

Heavy gait, complexion and lush and silver beard, this artist, who a Dutch magazine called the Andean Picasso in 1937, was always recognized as a painter, sculptor, engraver, draftsman, watercolorist and teacher.

However, throughout his life, he also dedicated to theater and poetry, facets that not everyone knows in his career as an artist and which also expressed the talent that runs through his veins.

When he was a child, with his neighborhood friends, interpreted works presented in the mining centers of Oruro, in a time in which this extractive activity was on the rise.

His poetic side emerged stronger after the death of his mother, Severa Mendieta, who was the muse and heroine of his life. For ten years, from 1997, Medina dedicated a poem per year, in memory of her departure.

With this and other publications he was awarded seven Latin American poetry prizes, who received them in Argentina.

But the art also accompanied his revolutionary character. In 1967, while continued his training at the school of fine arts in Paris, France, was not contained, he participated in the Cultural Revolution of May 1968 and as a result fell prisoner for 25 days in foreign land.

Years ago, in 1946, when he was nine years, witnessed the hanging of the then President of Bolivia, Gualberto Villarroel, in the Plaza Murillo.

Then, during the era of the dictatorship in Bolivia, assisted as a volunteer to heal wounded by bullet, not knowing about medicine.

“I saw many terrible things in the world. I think that the surroundings that raised me, World War II, the Chaco War and other conflicts, influenced my work. That is why I was classified as Expressionist and a painter with a social tendency “, he expresses.

Obviously, all these experiences are reflected in his works, in which myths and customs of the altiplano [highlands], the life and struggle of the miners, and various social problems is embodied in each canvas.

The fondness of Medina for art began in his early years, when he learned that a pencil and paper were sufficient to express himself freely.

But it was at age 12 when, seeing the need of her mother, who provided alone for his family, wanted to leave school to work.

“My mom, of course, objected strongly, because she wanted me to be a high school graduate first; so, resigned, I continued my studies,” says.

Three years later, by chance and thanks to one of his friends from the neighborhood, he met the famed watercolorist José Rovira, founder and director of the school of fine arts of Oruro, who invited him to study at that institution.

It was like discovering the treasure more valuable and important of his existence. That was the beginning of a life devoted to art, which also meant many sacrifices.

“With this dazzling, I decided to enter a night school and devote myself in the mornings at the school of art. I forgot about friends, parties and girls”, he says jokingly.

Everything I learned also transmitted hundreds of students over four decades. After a career devoted as a professor and researcher of folklore and handicrafts in Bolivia, he devoted himself to create with various techniques.

“The discontent is the basis of an artistic creation – Alberto Medina said. I am never satisfied with what I do and that allows me to continue to create.”

With this dissatisfaction as raw input, he made more than one thousand works that went to Japan, Germany, Spain, Yugoslavia, United States, Mexico, Costa Rica, Venezuela, Colombia, Brazil, Peru, Chile, Uruguay and Ecuador, among other countries.

These trips also gave him to know to geniuses of art such as Picasso, Dali and Fernando Botero, among others, which with their mere presence were an incentive for his career.In 1993, after winning the Grand National Award of painting in Bolivia, Ecuadorian painter Oswaldo Guayasamín personally invited him to exhibit his works in Quito and offered him food and stay at home.

What had to be one or two weeks of visit became six months of learning and living together with a renowned artist, which also took the opportunity to do a portrait to Alberto Medina, and vice versa.

It would seem that today, 75-year-old Medina already thinks in his retirement. However, the passion that has inside him, gives encouragement to continue with his creations, always spontaneous and freedom of expression.

“I will not feel satisfied until the last moment of my life and I will continue working on my projects until I already breathe no more – express-. The only thing I want is to leave an example of dedication and responsibility. It is what this world needs”.

I will live beyond death not because my memories in a marble headstone are perpetuated.

I will live beyond death not because on my grave by love or compassion a tear overflow.

I will live beyond the door not because my name is on a layer of bronze.

I will live beyond death as long as the world exists justice to evaluate a work of my creation.

(Poetry written by Alberto Medina Mendieta, in Madrid, Spain, in 1996).

Kudos to Alberto Medina and welcome to The Hall of Bolivian Fame!