Changes in climate during summer

According to the Senamhi, the trend report responds to a high pressure system. 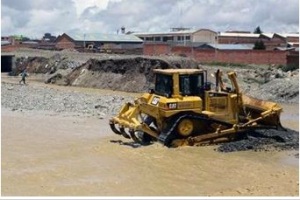 According to reports from the national service of meteorology and hydrology (Senamhi), the maximum indices of temperature and rain precipitation recorded in the Bolivian altiplano tended to go up in the summers of the past four years.

Marisol Portugal,  a forecaster of the Senamhi, pointed out that the increase in the temperature became more patent in the past two years. “In 2011, the maximum temperatures during February, which is one of the warmer months, hardly reached 21 degrees Celsius in La Paz; this year was recorded up to 25 degrees”.

This trend is repeated elsewhere in the West. “While even maximum or minimum critical have not been achieved, average temperatures are rising,” said.

The phenomenon tends to show a contrast. According to Portugal, the rise in temperatures in summer should also bring down to extremes, during the winter.

Interestingly, the increase in temperatures and rain precipitations cannot be attributable to any meteorological phenomenon, as La Niña.

“We are in a transition year, in which there is no unregistered phenomena that could change the climate,” she said.

About the rains, Portugal said that the increase can be attributed to a high pressure system that passes through the Bolivian Highlands. This phenomenon consists in the combination of winds of different origin, resulting in higher humidity and thus more rain and more heat.

“This atmospheric system has settled on the Highlands of the country generating rainfall in the highland regions, while in the East the rainfall have been scarce,” Portugal said.

According to a report by Civil Defense, corresponding to February, expected temperatures are to exceed their averages in the Highlands and down in the warm regions of the North of the country.

As a result of the increase in rainfall, the Senamhi and Civil Defense have registered the rise of the level of the rivers of the Lake Titicaca basin.

In the city of La Paz, the first days of the month, the persistent rains caused the increase of five rivers, prompting siphon-like collapses, landslides and floods in the South, especially in Huayllani.

On Saturday, the Governor of La Paz, César Cocarico, declared departmental emergency, due to the damage caused by the rains in – until then – 18 municipalities of the Department.

However, on Tuesday, the Director of the Unit of Early Alert, from the Governor’s Office, William Rioja, reported that the number of municipalities declared in emergency rose to 25, seven more than the mentioned by Cocarico. At least 2,600 families were affected throughout the Department.

So, what is central government really doing about this???!!! Instead of wasting our tax revenues on electoral propaganda and cult to the personality of current president, long-term sound public policies should be enforced to tackle climate change, which is inevitable and will hurt the bottom of the Bolivian society.