Maggy Talavera wonderfully writes about what is going on in our beloved Bolivia, her article appeared in Pagina Siete:

From “revolution” to involution

Neither blood in the face, nor weight in the in the heart. Just an obsessive thought: total power, absolute control. This is what exhibit without remorse, the militants who now govern Bolivia. They don’t even save face. What for, if the pleasure for them is in the joy that makes them cut wings, the off voice or the cry of pain and anger that can still be heard. The stronger the cry, best; the more profound silence, the better. The purpose is not only to impose a regime and Almighty single command, but also make the souls of citizens became subjects to master them better. Afraid, dominated by terror’ or hopelessness, which is worse.

Admittedly, they have managed to advance this purpose more than imagined by the same rulers. And not by merit only. For years they have enjoyed the courtesy of important sectors of Bolivian society, especially of the so-called progressive intelligentsia who spared no effort to open routes of high-speed that allowed these rulers to shorten distances to total power, sweeping with everything and everyone who finds in its way. Already well-known by their natural opponents, but also by the indigenous people who really believed that this was “the Government of the Indians”.

And no, it is not the Government of the Indians for Indians. Less even if these Indians are on the Plains [lowlands], even less if they are possessors of great wealth, even less if they are not prepared to submit their will and heritage to the will of rulers facing them with contempt, as did it other rulers or more than these ones. They look at and treat them with contempt, as the Palacio Quemado tenants have shown to close them, to step in the plaza Murillo, by denying hearing, to send the police to repress them, to intervene in their territories and community land with violence, by attempting to make these lands raffled among coca growers.

A contempt which translates also in speeches, in written words, such as those published recently by one of the two most important spokespersons of the central Government. In an article titled “Amazon and patrimonial despotic power”, Alvaro Garcia Linera makes it clear what the vision of the current Government on Amazonian indigenous Peoples of the Bolivian East. Subtracts them value and merits, it reduces them to a handful of indigenous Peoples subjected “to hacendal-corporate power”, co-opted and subordinate ideological and politically by the NGOs. Peoples, moreover, owners of the “great portions of land”, apparently, for the rulers of today, as were by the old [rulers].

That is the discursive line of the rulers of today: of the contempt of the other that is different, that thinks different, of the ones who call and want autonomy. Of course that behind that discursive line, lies the true interests of the rulers: that of appropriating land covering the third part of Bolivia and not by a desire to establish sovereignty or make them more productive. Possession of these territories is one of the main geopolitical and strategic objectives of the Government to Crown its highest aspiration, already noted earlier, power and total control. That is why their unrestrained eagerness to imposing the construction of a road through the TIPNIS.

But the TIPNIS – or the Amazon as a whole – is not the only point of focus of the rulers of today. It is not enough to want to control territories. They also have the total control of spaces of political definition, such as departmental and municipal governments. Already have advanced enough for this purpose, as evidenced by the dismissal of hundreds of mayors throughout the country and eight of the nine Governors elected by popular vote in 2005 for the first time. And will not give a truce, as they are showing these days to the only autonomous governorate control [Santa Cruz] who is not part of the MAS. There is no shame, no fear.

It’s saddening, and much more, what they are doing with Bolivia. It is not only that they violate rights of sectors claiming to defend – indigenous Peoples, for example – but they are destroying what little of institutionality that Bolivia had been achieved until now, giving guidelines for the improvement of a model or perverse political system in which the independence of powers is worth nothing, the institutional autonomy, social rights conquered over painful Union struggles and even less the will of the people expressed at the ballot box and beyond. In the name of “revolution” we are driving in the opposite direction, involution, in all senses. 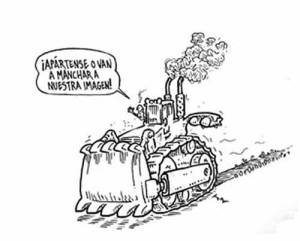 Maggy Talavera’s assessment is to be reflected seriously for the 2014 elections, we must think twice, before casting our votes:

These cartoons reflect the EVOlution or should I say inVOlution, rather than rEVOlution?

It shows a bulldozer saying “get out of our way or you will taint our image!” 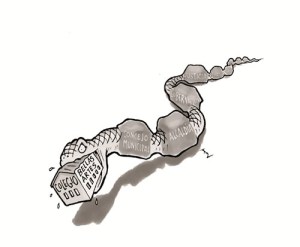 It shows current government swallowing the School of Arts (Bellas Artes). The government disregarded the purpose of that school and its private nature, to make it a regular public school.

Of course, they just go take over and period!

Who would object? is it feasible to object? not under this government who controls all powers…

Dad: “is the art of governing the People, son!”

Person: “do not teach the kid with old-fashioned definitions, mate, we all know that politics is the ability to misled and divide the People”

Dog: “kids should be told the truth, regardless if it is painful!”

Adan [meaning current president]: “Jindal is leaving, the mines are passing to the hands of the campesino brethren. The coca growers’ brethren are opposing to negotiate the price of the gas with Argentina… As you can see Avernoy, the economy is in the hands of the People!”

Avernoy: “we have to continue deepening the revolution, brother Adan!”

newspaper reads “the price of gas will not be negotiated, at least after the 2014 elections”

Dog: ‘until we reach the bottom!”