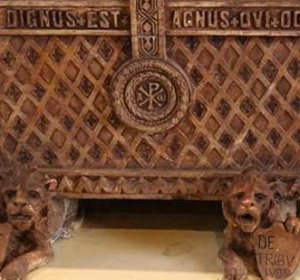 Despite what current government say about rejecting our past, we Bolivians cannot abstract from what we are: a country with tradition, with history.

Pagina Siete’s Tatiana Sanabria again shares to the world a wonderful piece of what is Bolivia:

Between the walls of the San Calixto school [La Paz city] hides a relic, a unique architectural gem – a few are in Bolivia – coffered ceilings of Mudejar style typical of the Islamic artistic movement, but that was developed in Christian territories of the Iberian Peninsula from the twelfth century.

While little is known about the history of this Chapel, there is no doubt that this space was initially the dining room of Marshal Andrés de Santa Cruz, who lived with his family in what now is San Calixto school, located on the street Jenaro Sanjinés in La Paz.

“The chapel of San Calixto school presents a mudéjar style building made by Euralio Morales, a Jesuit architect who came by the end of the 19th century, covered with a typical coffered ceiling of the colony which was very difficult to do.” “This is the most valuable item of this temple,” believes the architect and historian Teresa Mesa Gisbert.

Later, in 1940, Juan Noguet Spanish cabinetmaker expanded and restored this work, during the Rectorate of the father Ángel Lapuerta.

The Mudejar style practiced by Arab and Muslims who remained in the Christian kingdoms after being conquered. They stayed there to preserve their religion and legal status, and taught the Christians their techniques of their art.

Then this artistic style spread in America with the conquest of the Spaniards, who taught to various indigenous people to carry out the construction.

Currently you can find Mudejar works in Cuba, Colombia, Puerto Rico, Guatemala, Lima, Mexico, Peru, Venezuela and Bolivia, which includes the Church of San Miguel and the Jesuits, both in Chuquisaca [Sucre, Bolivia].

On the sides of the sculpture there is a coat of arms of Bolivia (with the head of the Condor broken) and another of Spain by the presence of priests of both nationalities.

Below the altar there is a stone grave that was removed from the Virgin during the 1970s, as established by the Second Vatican Council.

On this tomb is carved in Latin: “The Lion of Judah conquered”. This is a symbol of the Catholic Church indicating the presence of the Lord in the place.

As in any religious monument, there are 11 wooden benches arranged one after the other which host almost 70 people during the masses, says Father Jesus Auñón, responsible for the chapel from half a century ago.

The roof, based on straight and rectangular lines, is completely covered with a series of timber arranged obliquely and beams crossing from one extreme to the other.

The ornamentation on the inside of the arches of the stained glass windows and the front wall presents specific designs, such as flowers, as well as figures of angels.

For manufacture they used stone, ceramic, brick and plaster, materials of the Mudejar style.

In the entrance door and the wall that precedes two arcs, they used decorative manner in the walls, with contrasts of colors and detailed designs to dynamize the stand out plane. In short, this is the part that most portrays the Muslim stamp of the temple.

Father Auñón explains that this chapel was initially built for the cults of the members of the community of Jesuits inhabiting the colonial mansion.

Subsequently, with the creation of the San Calixto High-school, this Chapel retained its private sense and is for exclusive use of the students.

“There is no public worship service every Sunday as in other churches.” “We give masses at the request of students and alumni of the school,” explains the priest Auñón.

Sporadically and without restriction of days,  there are held in place: baptisms, marriages and some masses with special reasons.

Behind closed doors and without the presence of parishioners, the chapel of San Calixto keeps a silence and an indecipherable mystery which inevitably leaves rapt to those who watch it without the daily rush and with thoroughness.

For the full Spanish article and to see more beautiful photographs, please use this link: