The organizers seek to make visible the natural disaster in the country as a result of forest fires in Chiquitania. They summon to mobilize before embassy in other European capitals. 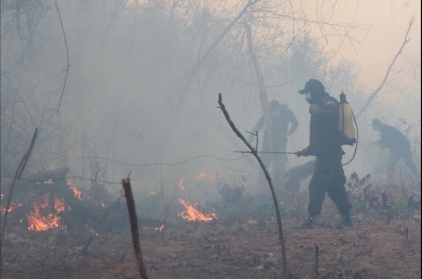 So were the flames in Roboré in previous days. Photo: Jorge Ibañez

The Bolivian community in London, Berlin and other European cities will demonstrate on Friday, at 11:00, before the Bolivian embassies in those cities to demand the declaration of national disaster in the country by the fires in Chiquitania.

The cruceña Ximena Banegas, who lives in London and Alfredo Romero, in Berlin, spoke with EL DEBER via telephone to explain that they will hold peaceful demonstrations also to make this natural tragedy visible.

“The concentration of Bolivians is a peaceful march to demand that in our country the declaration of a disaster zone be required, for these (natural) places that were already destroyed, due to the lack of reaction and attention,” Banegas explained, via telephone.

The objective of the mobilization is also to make the world known that the Amazon that stretches across the Bolivian east is burned. “We have seen the images of the fire in Chiquitania and the Amazon, and we want to do something. There is a lot of delay in reacting,” she lamented.

In Berlin, Alfredo Romero organizes the mobilization and said that the national government will be asked to officially ask for more international help against fire. In addition, the repeal of decree 3973, and other regulations, which authorize slash-and-burn [chaqueos] in forested areas.

“All these laws are to produce meat that will go to China. Meat is the most inefficient food to produce. The majority of soybeans go to other countries,” he said.The Bolivian embassy in Berlin is in Tiergarten, and in London in the immediate vicinity of Buckingham Palace. He also said that it is perceived that this tragedy is unknown in the world.

The call to Bolivians living in European capitals such as Madrid, Rome, Berlin to mobilize has been disseminated through social networks.