Contributing Reporter for The Rio Times:

After the extreme-left Maduro regime in Venezuela is about to falter, these opposition world powers are in need to find another ally in the region. Evo Morales’ Bolivia seems to be the candidate of choice.

RIO DE JANEIRO, BRAZIL – The Venezuelan dictatorship of Nicolás Maduro seems to have reached a state of definition. This regime, as we have known it until now, has most probably not much time left.

Sooner rather than later, Maduro will be forced to abandon power and perhaps leave the rich country in search of shelter abroad, trying to escape prosecution and investigations for human rights violations and extradition requests. 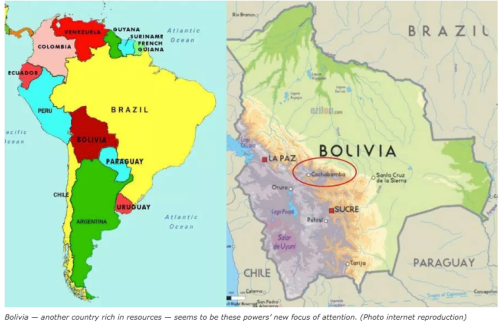 His accomplices will also need to flee with him, as well as the leadership that encouraged torture, persecution, and murder, an organization that was also devoted to draining one of the countries with the greatest natural resources on earth.

The allies who gained state support and maintained it against the denunciations of the international community will also have to return to their nations: Cuba, Iran, China, and Russia are already envisioning their future.

They swarm the region in search of another area where they can feel comfortable,  particularly where they could obtain privileges such as those they obtained in the times of Hugo Chávez and Maduro.

Bolivia — another country rich in resources — seems to be these powers’ new focus of attention. It has been for a long time, but now it is heightened by political needs. It is the new pearl to (finish) conquering. In the last few weeks, the alliance that Evo Morales is offering them and the red carpet of privileges that he is laying out for them have become evident.

Bolivia is attractive to Russia, China, and Iran — as to hundreds of companies from other latitudes — undoubtedly because of its mineral wealth, but also because of an institutional issue. The republican frailty it faces is alarming, although the majority of Latin America prefers to ignore it.

However, dissatisfied with the successive obstacles, the leader of the Movement towards Socialism (MAS) resorted to the generosity and extent of the Supreme Electoral Court (TSE), which reinterpreted the constitution and the will of the electorate, allowing him to stand in the next elections. There will be Evo for a while. A guarantee for his international partners.

At a steady pace, the man who has commanded Bolivia since January 2006 becomes a classic Latin American warlord caricature amid regional silence and the help of his partners who see their former continental pearl, Venezuela, fade away. There, they will find more amenities than the current ones in Caracas.

At least in rhetoric. In fact, the master of the Palacio Quemado did his homework from the start: he was among the first to expel the U.S. diplomatic delegation and the uncomfortable members of the DEA, in September and November 2008. He has felt lighter since then. His associates at the time, Fidel Castro and Hugo Chávez, encouraged and sustained him.

Why did he want the DEA agents gone? Morales accused them of being behind coups and other classic sins. A recurring artifice. The truth is that since then, denunciations of the spread of drug trafficking in Bolivia have increased and the number of areas committed to coca cultivation has skyrocketed.

The number of Air Force flights between La Paz, Caracas and Havana multiplied without any kind of control. Brazilian journalist Leonardo Coutinho shockingly described it in one of his works in which he illustrates Evo Morales’ blurry ties with Hugo Chávez and Fidel Castro.

Putin has laid his eyes on the altiplano (Bolivian plateau highlands). Smiling, he signed agreements with Evo that facilitated the supply of energy to Russia. Lithium and uranium are among the most demanded.

But there is more: the construction of an intriguing nuclear mega-project. It will be erected in the city of El Alto, near La Paz and about 4,000 meters above sea level. “I salute and express my gratitude for this facility,” Morales told his Russian counterpart on a visit to Moscow just a few days ago.

But what was signed in Moscow with the Russian State Nuclear Corporation (Rosatom) is not the first agreement on cooperation, nor is it improvised. It is the outcome of a long negotiation. The Bolivian government has already sent in technicians for training. The exchange began in 2018. In June, the last contingent of ten scientists arrived.

“The center will concentrate its efforts on research into the pacific use of nuclear energy. Its applications will cover various sectors of industry, geology, medicine, and agriculture,” Putin explained to an attentive Bolivian president. And he boasted, “There has not yet been a similar experiment in the world.” This is what several people are asking themselves: why do you need a nuclear power plant at this height? It’s a mystery.

Meanwhile, Gazprom — the mega energy company linked to the Russian president — is winning tenders in the Latin American country. It won the ambitious Vitiacua gas project. It is a very rich area granted to the Russian company by Yacimientos Petrolíferos Fiscales Bolivianos (YPFB). The production capacity is estimated at around 12 million cubic meters per day. Nothing’s free — a strange practice of energy sovereignty.

In a territory dominated by MAS (Movement towards Socialism party), China also feels comfortable. Its tentacles go far beyond generous loans. It does so in an economy that has shown solidity in the past but has been showing signs of wear and tear in the last semesters. In return, Beijing enables companies coming from those far-off lands to make unparalleled profits.

However, debt is increasingly suffocating. From 2006 to the present, it has increased by almost 2,000 percent. It amounts to over a billion dollars. This is not an extraordinary sum, but Morales must be generous in return.

He does it gladly. Fifteen road project awards fell into Chinese hands between 2013 and 2018; they total US$2.7 billion. Noteworthy: it is more than the debt owed to the Asian power.

Lithium is also a key element in oriental aspirations. Bolivia chose a Chinese consortium to be its partner in new projects for US$2.3 billion. The company awarded by Palacio Quemado was Xinjiang TBEA Group, which will hold a generous 49 percent stake in a company shared with the state-owned Yacimientos de Litio Bolivianos (YLB). Evo did not try to justify his choice very often: “Why China? There is a guaranteed market for battery production,” he argued.

Another question floating in the altiplano is what position will La Paz take when it decides to install its 5G networks?

Bolivian Thoughts opinion: What evo is doing represents a real threat to our hemisphere. Such an egomaniac and delusional autocrat does not see beyond his lust for power. Unlike Cuba, Venezuela, our Bolivia is more fragile and represents a great opportunity for this type of intrusions. Bolivians are mostly naive, the people who still give support to this lousy ruler, do not care about the hundreds of cases of corruption, of violent deaths, of blooming narcotrafficking … they either wish to ignore or are just dead weight for Bolivia.