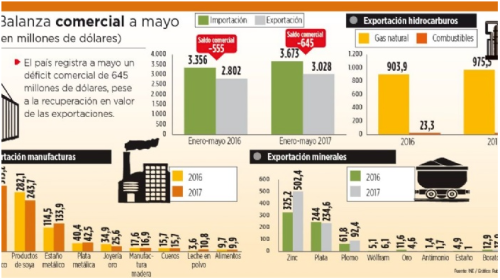 The trade balance of the country registered, until May of this year, a trade deficit of $645 million dollars. It’s been 22 months since July 2015 that Bolivia imports more than it exports.

Official data from the National Institute of Statistics (INE) reveal that in five months the country exported products worth $3,028 million dollars, but imported merchandise for $3.673 million dollars.

The negative trade gap could not be overcome, despite the increase in external sales by 8%.

Since 2004 with the recovery of international prices of the main export products, the country had recorded a constant trade surplus until 2015.

The manager of the Bolivian Institute of Foreign Trade (IBCE), Gary Rodriguez, explained that the negative trade balance increased by about $90 million dollars, compared to the first five months of last year.

He explained that this year there is a tendency to improve export earnings, but what worries is that imports continue to rise.

“We must try to ensure that this does not grow more than exports, because if not, that uptake of dollars or currencies will not reach to finance the purchases that must be made from abroad,” he warned.

He clarified that if the country imports capital goods, inputs to grow the industry or agribusiness is not bad, but that needs financing and that requires foreign exchange.

He pointed out that agribusiness is the fastest growing because it has markets, but the government needs to generate the conditions.

In the first five months of the year, natural gas exports grew by 8.2% compared to the same period in 2016 and totaled US $1.002 million dollars.

The demagogue and useless populist government has wasted our best economic times ever! Over $160 billion dollars wasted without creating sustainable employment and not bringing industries to add value to our commodities!

Governmental corruption, smuggling goods that kill our industry and narcotrafficking are the real “seal” of this government!