• Experts analyzed conditions for the integral development of the sector
At the end of the Forum “The main engine of economic growth. 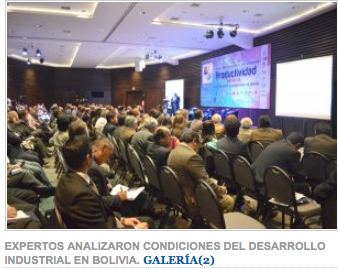 Industrial productivity. Current situation and outlook in Bolivia,” held yesterday [03/08/2016] at the headquarters of Government [La Paz], eight exhibitors of recognized career, raised five suggestions to support the development of the sector in the coming years.

Among them, they highlighted the strengthening of public institutions, greater access to financing and market opening. They also recommended the deployment of increased investment to strengthen the training of human resources (human capital) and macroeconomic stability.

The event also served to commemorate the 85th anniversary of the National Chamber of Industries, a period in which the creation of departmental chambers was pushed, for the sector to became the largest institutional sector of the national economy.

The Forum was attended by distinguished academics in the country, with Juan Antonio Morales, Horst Grebe, Gabriel Loza, Gary Rodriguez and Gonzalo Chavez among them. There were also contributions from the representative of the Andean Development Corporation (CAF), Emilio Uquillas, the expert of the United Nations Industrial Development, Johannes Dobinger, and Rodolfo Eróstegui, former authority of the Ministry of Labor.

The event, attended by more than two hundred participants, stated that productivity gains will allow manufacturing growth and industrial development in the future.

The president of the Departmental Chamber of Industry of La Paz, Horacio Villegas, acknowledged that the sector is with more than 30 years of stagnation and technological backwardness.

One of the first concerns of the industry was the weakness of state institutions, to which, they raised its strengthening. During exhibitions was agreed on the need for the support of efficient, flexible and effective public entities, regarding the application of labor, tax, environmental regulations, and other areas related to investments.

According to the conclave, the development of these powers of the state authorities can help create a better business climate and encourage private manufacturing activity, which necessarily would result in development and economic growth.

In this section, forum discussions were outlined by the State in support of open markets. It was noted that embassies and consulates should take more active actions in pursuit of markets and the relationship of suppliers and purchasers of Bolivian made goods as well as to improve trade negotiations in general.

Exhibitors supported government measures to expand financing to the productive sector, but felt that a better deployment of available credit, under the Financial Services Act, passed in August 2013 is required.

They also stressed that several small, medium and large companies do not know the advantages of the Act, other than to note that some financial institutions not yet fully apply the rules, according to opinions expressed by executives of the trade association.

Exhibitors, in the same way, influenced better preparation of human resources in technology, resulting in the challenge of increasing productivity in the sector.

They abounded considerations on the role of education centers and vocational training, estimated that those should be designed with a focus on demand.

There were also matching criteria among experts, by emphasizing the importance of managing the human resources in the sector and coordinate the technical bid with business needs.

The outcome document called for maintaining macroeconomic, political and social balances, which are required for growth and business development.

“We should not focus only on keeping inflation low, having a fixed exchange rate, make price controls, but to achieve strong growth in the productive sectors of the economy, adding value and diversification,” reads the document of conclusions.

In a simple, rational world, those suggestions would be taken into account by the ruling government … not here in Bolivia though …

The ruling ochlocracy is more concerned with staying in power, as true demagogue populists, they could care less on productivity, competitiveness of our private industry, a shame, a total shame!