IT IS THE SIX, THE Chordophone CREATED BY Randolf Berrios

An instrument invented by a Bolivian gains fame in Argentina

“An Argentinian friend called me interested in the instrument. I told her the story and my shame because builders in Bolivia did not expressed great interest in the six,” Berrios, who had said that the contacts maintained since his stay in Buenos Aires between 2003 and 2006 showed interest in his creation, after his presentation this year in Bolivia.

So in that circumstance, Berrios contacted Mariano Delledonne a luthier who lives in the city of La Plata. After the Argentine asked what requirements must be met to build the instrument. 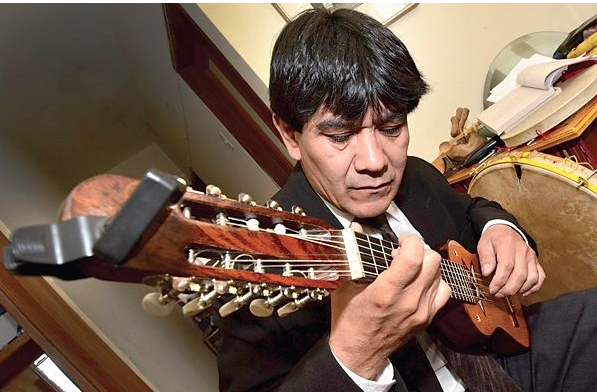 Berrios’s response was: “… No conditions or requirements, Six, from conception, is a gift for Latin America, anyone who wants, can build, modify, extend and play it. The idea is open” Then, Bolivian inventor shipped to Delledonne, the design tool developed by the architect Freddy Sirpa.

Between the last two months of this year [2014], the Argentine built six. In this course, the December 18, Delledonne received the excellence recognition by Unesco, for one of his creations: the electric charango.

According to the international organization, that charango “meets the double condition of being traditional and innovative at the time, which guarantees a sustainable stay in the contemporary world,” reads the eldia.com.ar website.

At the official ceremony, presided over by Minister of State for Culture, Teresa Parodi, Argentine craftsman presented not the electric charango, but the six [el seis], who had finished building.

At the ceremony, Parodi was curious about the six and was encouraged to play a few notes. “It is an important and significant event because the instrument motivates the bohemian that people have,” said Berrios.

In Bolivia, the craftsman who built the six, which interprets and proudly shows Berrios was Jaime Garcia, who is in the process of making an “improved” version of the instrument.

By 2015, Berrios plans to renew his repertoire, improve the interpretation of the six to record a new album. “The idea is followed by linking with other instruments. I want to make a string ensemble with a pair of instruments like cello and guitar, that, once the code is defined. In addition, I will present a new recording,” said Berrios.