IN BOLIVIA, CONTRABAND REPRESENTS 45% OF IMPORTS

A STUDY OF TEN YEARS AGO IS NOT UPDATED 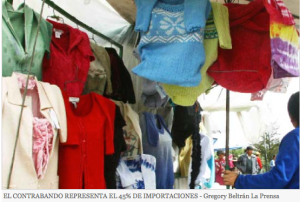 The vice president of the Bolivian Institute of Foreign Trade (IBCE), Antonio Rocha Gallardo said that since then, this type of study was not done again, which currently serve to determine the measures to be taken in the country to eliminate this evil that recently, for example, forced the closure of several textile mills.

This will be one of the main topics addressed today [12/17/2014] at the forum called Covenant on preventing and combating corruption in the logistics chain of foreign trade, to be held in La Paz.

IBCE general manager, Gary Rodriguez, reported that the activity is expected to sign “an unpublished letter of corruption understanding” between different actors of civil society and the National Customs of Bolivia, “as a sign of goodwill and commitment to address corruption in the field of foreign trade, being this a remarkable public-private effort.”

Antonio Rocha said that to fight corruption and smuggling, is required in addition to technical and administrative actions, to adopt a series of incentives, such as quinoa production, which is produced in some regions through which passes a large amount of illegal goods and which is then distributed to the country.

Current government likes to brag about the power control they exert in ALL branches of the State, so, in theory this control and smuggling elimination could be perfectly done. However, most of their supporters come from the informal economy…