Confessions of the “pollera” doctor awarded by El Deber

Nancy Kasai Janko will become the first woman in pollera [skirt that some mestizo and indigenous women wear, its origin is Spaniard] graduated as medical doctor. She is a young woman who did not found an obstacle to get her away from her goal. 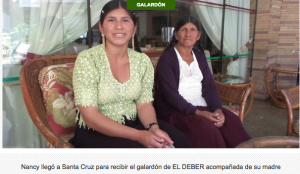 In the will is the power and Nancy knows. The small mountain that walked up and down every day to go to school was nothing more than a challenge. Now Nancy is at the top, she will soon graduate as a doctor in 2015, and not any medical, is the first in Bolivia that makes it dressed in a pollera.

That girl who used skirts and braids studied until fifth grade in her native Siguayo schoolhouse in Oropeza province of [Chuquisaca] Sucre, and then had to walk half an hour every day to Cortijo, to get her high school degree, is now nervous, but nerves are of joy. Tonight Nancy Kasai Janko will receive the Patujú Bronze award given by El Deber to the personalities of the year, and she is.

Her mother accompanies her, is just as nervous as her daughter but is happy. Isidora Janko’s heart is overjoyed. In Quechua says she is proud and Nancy’s father also is, though no longer accompany her in this world.

When Nancy answered our questions, Isidora looks with devotion and silently. Observes her as if not believing in what has become her child. The future medical was born in September 1991 and lost her father when she was 14, now makes her year in a rural area of the province of Tomina.

She is the fifth of eight children. She says that “the piece of land” that now his family has in Siguayo was a gift from the community. Before becoming owners lived as caregivers. Her mother lives there, dedicated to raising sheep.

From there the matriarch began the journey home, this Sunday, overland to Sucre and then a flight with her daughter, she moved to the city of Santa Cruz to witness the recognition that will make the “Mayor Journal” [El Deber’s nickname].

Nancy says she was a studious. The half an hour walks to attend high school, at Cortijo, sometimes on an empty stomach, others with heat or cold, did not intimidate her goal of finishing high school and graduated with honors, which allowed direct entry to University San Francisco Xavier of Sucre where the medical career chosen.

She confesses that in the first year, she even thought about changing career by how demanding Medicine was and due to lack of economic resources, but received the support of her family, a school teacher and her fellow university companions that motivated her not to surrender.

“I never felt different (for using the pollera, dress skirt) that drew encouragement, although at first I felt a little scary,” she recalls. She states that the period of internship has helped her define her medical specialty, she wants to be a pediatrician.

“I am told that there was a student using pollera also in my career, but after two years of study began to wear dresses,” says Nancy. And to the question, “Would you?,” answered without hesitation a resounding no.

It has been suggested that she change the pollera for a dress when she graduates as a doctor, but Nancy says there is no reason to. She dreams of making a specialty and leave the country although it is complicated, believes it is not impossible.

With some regret confesses that she has not had and has no TV which makes her  somehow disconnected from the world, she even says she is unaware that her story is  already known outside the borders of Bolivia.

I admire people like her, with lots of self-esteem and despite all difficulties build up their lives. Regardless of political systems, ideologies, she is one great human being!

I welcome her to The Hall of Bolivian Fame!