Current Bolivian government is the MOST CONFLICTIVE in history…

MIlenio Foundation has issued on February 3, 2012 their report No. 132 which demonstrates how current government has become the most conflicting in Bolivian history. I am not surprised, as current president’s appearance in Bolivian politics started with the infamous blockades in the Chapare since the times he was just the leader of the Chapare coca growers, then congressmen and now president. The report says: 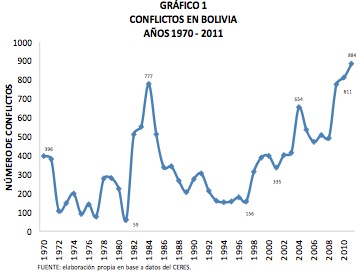 The current Bolivian Government, which chairs the nationalist and populist Evo Morales, has been the most controversial in the history of the country, according to a study released today by the Millennium Foundation, private entity that adds that the conflict is “a drag on growth”. [the chart to the right registers number of conflicts from 1970 to 2011]

“With 884 new events conflict recorded in the press during the year 2011, breaks a new record since 1970 (…)” “The second Government of President Morales management is by far, the most controversial of contemporary history of Bolivia: an average of 2.3 conflicts per day”, says the report.

Report adds that “having been Morales the protagonist of many past conflicts, some thought that his experience or his identification with social organizations would enable him to handle the situation and reduce conflicts”, but “information shows that otherwise happened”.

Morales, leader of the Union of producers of coca, the base to produce cocaine, came to power for the first time in 2006 and was re-elected in 2009 for a second term in Office which ends in 2015, but has already said that he thinks a third period until 2020. [which is questioned as there can not be a third term in a row, however he an this political party are well versed in the ‘interpretation’ or the compliance of laws they managed to get approved; if that were to happen, it would only shows how close this government is to an authoritarian regime, following the president of Venezuela in his mad and relentless urge to remain in power, no matter what]

He adds that “the data come from records of newspapers that are collected, classified and processed by (…)” “two centers of social research based in Cochabamba, which have already published abundant analytical material warning costs and risks for development involving the conflict dynamics in the country”.

Projecting these parameters in recent years estimated the cost of conflict for the development of the country according to the chart [to the left]. The thick line shows the actual GDP growth Bolivia has achieved in the Decade, while shaded line shows its potential in the event that there was no conflict described in this document. This is represented on the graph as the red line losses in growth during the period.

This explains that the export boom and publicized public investment boom has failed to just a modest level of growth, making a slower reduction of poverty.