The tajibos of the streets of Santa Cruz are stressed

Pink and yellow flowers bloomed at the same time, a beautiful show, but that is irregular. The pink tajibo [Tabebuia chrysantha (araguaney or yellow ipê)] was late in blooming. It was the driest July [2017] of the last 10 years. 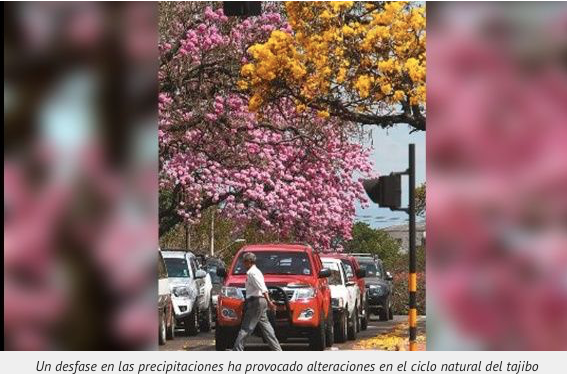 A subtle detail that a cruceño with many years in the city can notice, is the unusual thing is that the pink tajibos bloom at the same time that the cork of yellow flowers. This is a phenomenon that can be noticed in different streets of the city of Santa Cruz de la Sierra these days, where yellow and pink blooms alternate their tones in the branches and in the carpet of petals that they leave. A sight pleasing to the eye, but out of the ordinary.

Sixto Angulo, a scientist with the Foundation for the Conservation of the Chiquitano Forest (FCBC), explained that this anomaly is due to a delay in the flowering of the pink tajibo, which has led to several of these plants to flourish irregularly and at the same time as the cork oak, a tree related to the tajibo, with which he is often confused.

A case of stress

Similar is the opinion of Ana María Carrión, biologist associated with the Museum of Natural History Noel Kempff Mercado. This anomaly, she says, may be due to the stress to which tajibo plants have been subject in the last month; first there were abundant rains in April and May, then a sudden drop in temperatures, then intense heat and strong winds in July, which have stripped them of many leaves still green. Water accumulated in April and May also contributed to delaying flowering.

All this pressure, said Carrión, induces the plants to bloom at the wrong time as a natural reaction to adapt to the new climatic conditions, a natural reaction of any living being before a sudden change in their environment. However, although the flowering process has been irregular, the tajibo does not run any immediate danger, because it is one of the strongest plants of the cruceño ecosystem, resisting even the fire of sporadic fires.

According to Javier Coimbra, a member of the FCBC, the normal flowering cycle of this emblematic plant begins with the pink and purple tajibo, which usually give their flowers in July, are followed by the cork oak that blooms in August; And the white tajibo that has multiple blooms after each sporadic rain, being the only one that can give flowers several times in a season.

The phenomenon of irregular flowering of tajibo plants has been related, both by Carrión and Angulo, as part of the consequences of climate change that is altering the global climate, since there have been sudden drops in temperature and a persistent drought during the last month.

According to data from the National Meteorological and Hydrology Service (Sehnami), available on its website, the previous month was extraordinarily dry, with only 1.2 mm of precipitation distributed throughout the month. The last record of the same period that has approached so much a figure so low has been the one of July of 2007, when the accumulated precipitations reached 16,0 mm, being thirteen times more abundant than the present year. There are no records in El Trompillo prior to 2006, this July being the driest recorded.