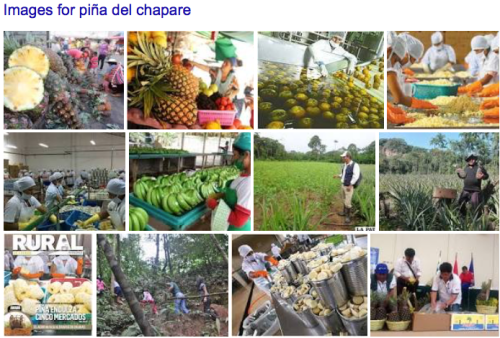 Bolivia has earned more than 20 million dollars so far this year from sales of pineapple production, stated the director of the National Fund for Integral Development, Erlan Oropeza.
That figure comes from the marketing of this product in the national market, agricultural industries and exports, Oropeza told the Bolivian News Agency.
To do so, the country increased the area devoted to this fruit, from 3,500 hectares last year to 4,250 hectares in 2017, he added.
Oropeza said that they projected to increase the production area to 4,500 hectares of pineapple, a thousand hectares more compared to 2016, in addition to increasing the number of producing families from 2,500 to three thousand, supported by the product’s good prices.
However, the manager acknowledged that pineapple exports dropped substantially from 2011, by 40 to 20 percent, due to phytosanitary controls mainly in the Chilean market.
In addition, he said that last year 60 percent of the production was sold in the local market, 25 to 30 percent to agribusiness, and the rest abroad.
The main cultivation centers in Bolivia are the departments of Cochabamba, Santa Cruz, Beni, Pando, and, to a lesser extent, Chuquisaca and La Paz.
Since 2014, the Bolivian government has been promoting a national program which provides up to 69.5 million bolivians (i.e. 10 million dollars) to increase and strengthen the country’s fruit production.
Source: prensa-latina.cu
http://www.freshplaza.com/article/179790/Pineapple-sales-generate-more-than-20-million-dollars-in-Bolivia
Bolivia Thoughts opinion: It is an undeniable fact that pineapple exports are a reality due to the Alternative Development Program sponsored and funded by USAID/Bolivia in the 90’s.
Like bananas, it was extremely hard to set these production due mainly to the relentless coca growers’ effort to prevent alternative crops other than coca … in addition the numerous road blockades by those coca growers had also damaged our pineapple and banana exports. Bolivia also had to learn about a cold-chain to secure value and meet export market standards.
Nevertheless, it is a reality! We should understand it is extremely important for Bolivia to continue to promote such exports as they are legal and represent our potential as food producers.