WARNING: Current crisis is not temporary but structural and long-term

According to an study by IMF economists:

Current crisis is not temporary but structural and long-term

The flexibility of the exchange rate, which has increased in countries exporting raw materials during the last decade can help mitigate the impact of falling commodity prices. 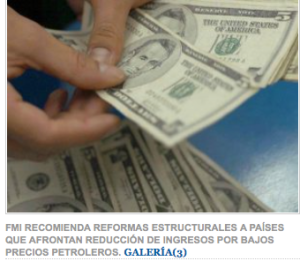 The International Monetary Fund (IMF) warned that the global slowdown is not just a cyclical phenomenon; also it has a structural component. “The investment and therefore the potential output tends to grow slower in exporting countries at the time of the falling prices for commodity,” the document of the multilateral organization says: “Where are the exporting countries of commodities going? output growth after the boom in commodities,” published in recent days.

According to the Fund, weak prospects for improved prices of raw materials would subtract about 1 percentage point to the growth rate of commodity-exporting countries in the period 2015-17 compared to the 2012-14 period.

However, was appreciated that in the energy-exporting countries, it is estimated that the negative impact would be even greater, about 2¼ percentage points of GDP on average, due to a sharp drop in oil prices during the past year.

The decline in potential growth means that the policy response should go beyond taking action on the demand side and should include structural reforms, Oya Celasum warned, who led the document along with a team of ten economists body.

The commodity-exporting economies are in a difficult situation. Global commodity prices have fallen sharply in the past three years, and output growth has slowed considerably between emerging markets and commodity-exporting developing countries, the report said. “The appropriate policy response depends not only on the degree of the slowdown in growth, but also on whether output fluctuations related to commodity prices are structural or cyclical in nature”. These issues are discussed in the study using data from more than 40 exporting economies of raw materials corresponding to a period of more than five decades.

The flexibility of the exchange rate [which did NOT happen in Bolivia], which has increased in countries exporting raw materials during the last decade can help mitigate the impact of falling commodity prices. The decrease in revenue from raw materials and lower potential growth limit the margin available to counter the slowdown with fiscal policy, he said. [there goes down the drain the bragged “shielded economy” of the Bolivian populist and demagogue government]

On average, about two-thirds of the decline in output growth in oil exporting countries during a fall in prices of raw materials typically corresponds to the cyclical component of growth. The other third tends to be attributable to structural component and is the result of reduced investment and potential output. Improvements in macroeconomic policy frameworks in the last decade have allowed exporters to be better able to cope with a fall in prices of raw materials.

Lets be clear, the ruling ochlocracy in Bolivia has done nothing to mitigate any of the above… as most populist demagogue regimes… a big mouth, little cash thrown away as bonuses, does the trick… to perpetuate themselves in power. A staggering example is the slow but ongoing destruction trend of the economy and society in Venezuela…