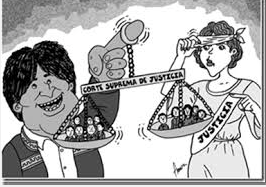 The prosecutor for the department of La Paz, Patricia Santos, reported yesterday that an assistant and two prosecutors in the city of El Alto are detained in police cells, to be involved, along with two other people outside the institution, in alleged extortion. Today [01/25/2015] will be forwarded to the precautionary judge, who has 24 hours to indicate time of the hearing.

She explained that last Thursday, a person filed a complaint in which he reported on the actions of individuals, falsifying prosecutors’  credentials proceeded to carry out operations, including giving orders for false arrest, to frighten people and extort.

“After the report, which has been done is immediately form a committee of prosecutors, who carried out the investigation and the corresponding operating, achieving the interim judge immediately, search warrants granted,” she said.

The above news is just part of the tiny iceberg tip that happens with Bolivian Justice System. The worst is that it is currently subdued to the Executive Branch off Government.

To make things worse, current illegitimate Bolivian president, because of his re-re-election who showed more votes than people registered to vote… is now planning to conduct a referendum… which will be no more than a huge excuse to appoint people they can manipulate more the justice to their benefit!